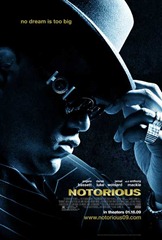 The story of the rise and fall of Christopher Wallace, otherwise known as The Notorious B.I.G.

During her son’s funeral, Voletta Wallace opens the window of the limousine to see hundreds lining the streets giving thanks to her son.

“We can’t change the world unless we change ourselves.”

Notorious is a film that seems like a good project and overall, a good idea in thought. a similar true-story film such as What’s Love Got To Do With It made for a great film, and was very entertaining. However, Notorious’ attempt fell flat.

The film isn’t terrible, in fact, it is very watchable. However, it just seems like a film that never gets out of second gear, and is relegated to a rehash of history with look-a-likes playing the roles. At the end of the movie, it just seems like Notorious would have been better if it were a documentary similar to Tupac: Resurrection.

On the other side, Jamal Woolard did his best to capture Christopher Wallace, and Derek Luke did a great job of being Sean “Puffy” Combs.

In the end, Notorious left a lot to be desired. It left those who aren't familiar with the true events more confused. And it failed to explain who Christopher Wallace truly was.

All in all, a decent movie that is acceptable for a TV watch.