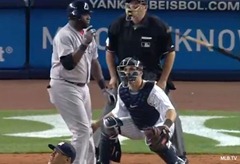 After watching an amazing NBA Finals, and thinking back on all the attention, ratings, and media coverage the NBA has received over the past week, and even throughout the playoffs, it forced me to think about the sport of baseball, and it’s future. I know I have touched on baseball’s future in the past, but that was directly toward the lingering problem of the declining presence of African-American ballplayers in the game.

The question that got me thinking was raised on the Rucco and Lundberg Show on 1050 ESPN radio. Both hosts examined the state of the NBA, and how it is in a good state moving forward with so many young stars, and each of them being on many different teams allowing, along with the varied storylines, made for an overall good product. Then the topic of baseball was brought up and the question was raised, “outside of Yankees/Red Sox, what else does baseball have to offer right now?”


For the baseball purist like myself, and many of you reading this, the quick answer would be “there is so much…(begin baseball rant here). However, in the grand scheme of things, how much of it does the rest of the nation really, truly, care about?

Major League Baseball is coming off of its worst rated World Series this past October. And while the baseball purist would shake their head in disbelief that Josh Hamilton, Cliff Lee, Buster Posey, and Tim Lincecum didn’t do much for the casual sports fan, the idea really isn’t that far-fetched. It’s just not as sexy as the one named stars such as LeBron, Wade, Kobe, Dirk, Durant, Carmelo, Rose, and the list goes on and on.

And here is the biggest blow of them all. Prepare yourselves baseball diehards.

The question was then asked, “Who is baseball’s biggest mainstream star moving into the next generation?”

The diehards will throw out names like Mauer, Posey, and Cano for starters, but truly, baseball’s biggest stars right now (and still are) Derek Jeter and Alex Rodriguez. And once again, they are tied to Yankees/Red Sox, and the scary thing is, they are both in their late thirties.

And as a baseball diehard, I’ve slowly begun to inch toward the modern way of thinking. The more “hip” way of entertaining.

For one, I’ve come to realize baseball takes itself way too seriously at times. Ortiz’s bat flip seemed to be such an issue this past week. You know what, who cares? I hate the Red Sox, but I’ll be honest, Ortiz’s antics are entertaining, and he brings a certain flair to the game. The game needs more of that.

I grew up loving Ken Griffey Jr’s swing, and the way he turned and watched the ball sail into the right field stands.

Rickey Henderson, although out of my time a bit, seemed like a very entertaining ball player.

Bryce Harper, the Sports Illustrated proclaimed, “LeBron of Baseball”, and a potential boom for baseball like Strasburg was before he went down, recently blew a kiss to the pitcher rounding third after hitting a homerun in a Single A game. Honestly, at this point, let him do it. The game needs a villain to fill the role Barry Bonds left. Look how well that has worked out for the NBA with LeBron now in that role.

Heck, who knows, maybe Harper will hold a one hour special in a couple of years teaming up with other great players from the 2010 draft?

Slowly, we’ve seen the celebration on the other side as well with pitchers giving fist pumps and gyrations after a big strikeout. The game needs the added emotion and the added flare. Yes, there is line between style and downright showing someone up, but you know what, if you don’t like it, do something about it.

All of the talk about realignment to two 15 team leagues with five teams making the playoffs, and the two wildcard teams playing a mini series – you know what – I like that idea too!

Overall, the one question that has baffled me is, why isn’t the game’s best player in Albert Pujols treated and marketed as such?

As much as I love Yankees/Red Sox and the passion involved in it, baseball is in danger of becoming a one trick pony. I’d hate to see it get to the point where if it isn’t Yankees or Red Sox related, then it isn’t big news.

Overall, the game has loads of talent, and will be fine moving forward. However, my greatest fear is no one will ever know besides those of us that really care.