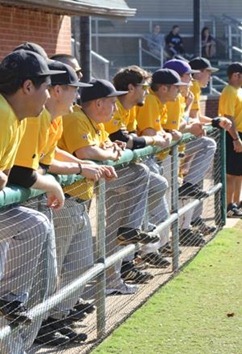 I miss college baseball. I miss everything about it. From the double headers, to the sound of the metal bats, to the sheer camaraderie and overall enthusiasm surrounding the game. It was a special time for yours truly. For four years, I had the opportunity to enjoy college baseball. And while it was at the DIII level, I knew that it was nothing to be scoffed or taken for granted. In fact, I barely played, and was often one of the few men out of the bullpen, but I simply just enjoyed being around the field, around the game, and around the atmosphere.

See, as a child, I was born with two club feet, a congenital deformity that causes the foot to be completely rotated at the ankle. While my right foot happened to work itself out, my left one never did, and needed surgery to correct it. After several surgeries, and a pin inserted into my left leg, a fixture still in my foot today, my foot was placed in a cast for almost a year to correct. After removal, the doctor stated the surgery would cause permanent lack of development in the area from my left calf to foot area, and because of that, being physically active would be difficult if not non-existent.

Fast forward twenty years, wearing a uniform on any field was an accomplishment in my eyes. Simply being able to defy those odds, and overcome the constant pain, baseball was worth it. I love baseball. And I still do. And while I never was that great of a player, or the greatest runner, I can punch the keys away today knowing that I worked as hard as anyone to not only stay on the team, but improve to the point where I had my moments during this special time. In fact, not only did I manage to overcome physical disabilities, but I also managed to pick up pitching at the collegiate level, and stick with it for the duration of my college career. An accomplishment looking back on, that I think is crazy, but amazing, as well.

So yes, I was a slightly below average player, and considering my lack of experience compared to my teammates on the hill, I managed to pick up one collegiate win (although on a technicality that the starter did not go the qualified amount of innings) in my hometown of Brooklyn, NY. I also enjoyed a half-season of being perfect (Yes, I sported a 0.00 ERA for while). And was able to watch my college roommate, and 1/3 of my best man trio for my wedding, play some of the best third base that I’ve ever seen in my life.

Looking back, I just enjoyed it. And sometimes, the moments where I took the game a little too seriously, mostly my senior year, I wish I could just go back and change.

As the Regional and now Super Regional NCAA Baseball tournament are wrapping up, I find my self wrapped up in every game. I enjoy just sitting there watching the same nuances of the game that I enjoyed during those four years. The sitting on the buckets. The spitting of seeds. Playing with the different grips on the baseball. Yelling “baaack” for every pick off attempt by the opposing pitcher. And the list can go on and on. Every game, every moment, every pitch, many of these memories come flooding back to me.

Watching these teams play, I enjoy the spirit, the fun, the thrill, and even the sheer urgency of a senior laden team on the railing looking on during an elimination game. It’s a certain relational experience that can’t be had watching a Major League Game.

It’s not often that I give major kudos to collegiate sports, but I really believe of all the NCAA post-seasons there are, collegiate baseball is the best. The best team wins. No computers. No fad/gambling pool creations. And no RPI’s and fluke victories. Just a bunch of kids playing with a chance to make it to Omaha (which is such a cool concept), to be crowned National Champions. 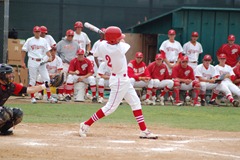 I’ve never had the privilege or the ability to play at that level. Heck, I barely hung on at the DIII level. However, the NCAA baseball tournament will always relate to every person that laced up a pair of spikes. There is a line in the movie, Friday Night Lights, that refers to grasping the moment of a special time saying, “After this, it’s just babies and memories”.

Those memories – triumphs, failures, and obstacles – during this special time will always remain. And every year, regardless of what school name is written across their chest, we will all live vicariously through the collection of student-athletes who are now in their time.

A time they too will soon realize, will stay with you forever.