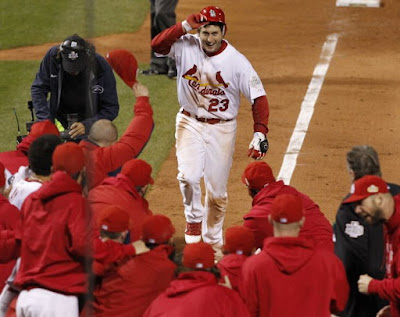 On a cold night on October 28th, 2011, I’d be remised if I didn’t touch base on what has been an amazing World Series between the Texas Rangers and St. Louis Cardinals. Usually, yours truly will touch base on the most memorable moments after the season is completed (Remembering The 2010 MLB Season), but the 2011 World Series brought a different dynamic for the game of baseball.

A World Series that did not feature the mega-market ratings grabbers in the New Yorks, Bostons, Chicagos, Philadelphias, and Los Angeleses, yet, Dallas-Forth Worth and St. Louis gave us the type of World Series that baseball has needed for awhile. It was a series that not only kept the die-hards interested, but reeled in the casual and the sporadic fan.

It was a World Series that had intense drama, various storylines, and reintroduced a key aspect that makes the game of baseball such a beautiful thing.


It was the type of World Series that saw a guy like Arthur Rhodes, who has pitched what feels like since Roosevelt was in office, finally on the other side of a moment.

It was the type of series that saw Albert Pujols, the game’s greatest player, and the world’s most underrated athlete, make history by smashing three homeruns in one World Series game, including one that might have induced foundation damage to the facing of the left field upper deck.

It was the type of series that had blown leads, memorable comebacks, miscommunication calls to the bullpen, and the most energetic and entertaining manager in baseball.

It was the type of series that saw an honorable story and man named Josh Hamilton, fight through the pain of a groin injury to perform on the game’s biggest stage.

It was the type of series that saw Chris Carpenter, another former Blue Jay from the Roy Halladay mold exhibit the knowledge from his apprenticeship.

It was the type of series that saw a team in the Texas Rangers only a strike away from a World championship – twice! – yet, ended the season watching another team celebrate for the second straight year.

It was the type of series that – as much as I hate to admit – proves there are passionate baseball fans outside of the Northeast. And most importantly, that baseball is indeed alive, well, and healthy as a sport, entity, business, and tradition.

Speaking of tradition, it was the type of World Series that gave us chills and shades of Jack Buck via his son Joe Buck in another Game 6 walk-off, “We will see you…tomorrow night!”

It was the type of series where a player named David Freese, who grew up listening to Jack Buck and rooting for the Cardinals, not only saved the series with a two out triple and forced a Game 7 with a walk-off homerun, but became World Series MVP.

Who didn't have those dreams in the backyard playing wiffle ball? Or on the asphalt playing stickball?

Quite frankly, this was the type of series that proved that baseball is the only sport that can turn grown men into little boys with big dreams again.

The greatest sport on earth.