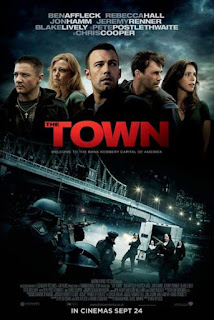 A chronic bank robber looks to balance his current life and his feelings for a former bank manager connected to his last crime while attempting to make his way out of the family bank robbing business.

After Boston P.D. and the FBI successfully close in on them after robbing a truck, a chase scene begins. After the group gets away from the police, they exit a car to switch vehicles, at which one sole police officer in a car sees them. After staring, he finally turns his head acknowledging that he will concede a potential losing gun fight and let them go.

Doug McCray: I need your help. I can't tell you what it is, you can never ask me about it lateter, and we're gonna hurt some people.

James Coughlin: ...Whose car are we gonna' take?

The Town is a very good film that includes drama, suspense, intelligence, and even romance all wrapped into sure entertainment. The film, which, somehow, has a "Good Will Hunting" feel to it, causes the viewer to feel for a mastermind bank robber trapped between exiting his old life and beginning his long awaited new life, while attempting to bring his new found love with him. The Town does a great job of keeping the plot with historical landmarks around the Boston area and authentic accents.

Most importantly, where The Town shines is in it's character development. Despite their occupation of terrorizing and robbing banks, the film does a great job of causing the viewer to somehow feel for the mastermind Doug McCray, who is looking to change his ways. The film emphasizes the notion of shades of gray in life, rather than the usual and sometimes vanilla, black and white, good-versus-evil plots often seen in action movies.

All in all, The Town is a great film with superb acting by Ben Afflect that is well worth the 125 miniutes of running time.