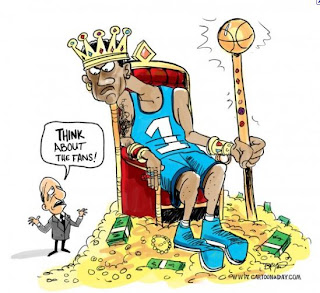 It is time to push the red button. Alert! Alert!


After the recent marathon meetings held by the NBA and the Players union, nothing has been settled other than the clear fact the NBA or it's players just don't care about the health of their brand. As per the case with these labor lockouts and strife in professional sports, the casual sports fan usually generalizes the issue by stating "its nothing but millionaires fighting over billions". Most of the time, they are completely correct, but often, there is a bit more to the complex situation. Yet, in this situation, as a huge NBA fan, I find myself harboring the same thought process on this issue - enough already!

Heck, I love the NBA. I need the NBA! I understand it is a league that is hit or miss depending on your geographic location in this great country, but for a kid growing up in Brooklyn, NY in basketball-rich New York City - the NBA is winter! It keeps me warm and busy until those golden words - pitchers and catchers report to camp.

Yet, as much as the two latest sports lockouts worried me, I felt both would be resolved due to the monstrosity that the NFL is, and the fact that the NBA is finally in a good place after its most intriguing season in a long-time.

The NFL got it right. Agreed. Signed. Sealed. Play Ball.

Instead, the NBA has been slacking (only meeting once in August), and now with the season in jeopardy, have finally made it a priority. And it seems everyday we hear the same sound bytes, the same disagreements, and the same recycled stories.


I'm also tired of hearing from Derek Fisher and the player's union about how they are being robbed. I'm even more tired about hearing from these "superstar" players claiming more of the pie.

Starting your own league and barnstorming games around the league? Yeah, Good luck with that.

I'm tired of it all.


I understood the need for the NFL stoppage. They were fighting over how to spend money that was there. A large pie that needed to be regulated and funds that ought to be diversified.

The NBA is fighting over money that isn't there. Big difference. And when I hear every BRI proposal hovering around an inevitable agreement of 50-50, it makes my blood boil that much more.

Am I blaming the players?


Not at all. They aren't the ones that are willing to climb over one another to sign the next hottest free agent. They aren't the ones giving Joe Johnson, albeit a good player, a superstar-like max contract. It's not good business. It never has been. I like Joe Johnson, but a player making that much money without putting butts in the seats or eyeballs on the television, is not worth that type of investment. Bad management is rampant throughout the NBA, and has been for years. Just take a look at the last ten years of my beloved New York Knicks. No fault of the players.

So, you are blaming the owners?


It's not their fault either. Basketball needs a hard salary cap, period. And although such a system will prevent my Knicks from adding that proverbial "third piece", for the overall health of the league, it is needed. When you look at the current financial system in the NBA, it is by far the worst of the four major sports. With guaranteed money, and the inability to be flexible with cash flow, the NBA has created a microcosm of our current economic climate with plenty of top tier players, many minimum-earning players, and a very, very small middle class. And as we all know, there are only a handful - five at most - players that really deserve top tier, max contract, money in the NBA. Unfortunately, there are more than a dozen.

However, in the long run, strikes, lockouts, and negotiations are all about leverage, and the players have no leverage in this situation. Yes, none.


As much as they want to "fight the good fight", at the end of the day, the players need the NBA. The NBA is the vehicle in which these players need to showcase their talent. These so-called showcase games the players are looking to make a tour of will never produce, or heck, pay, like the NBA does. So spare me on the optimistic revolutionary-vigilante thinking. To further prove this point, take into consideration that most NBA owners generate income from other business ventures outside of the NBA and the fact that there is no ticking clock on ownership.

On the other hand, sans the always thought of superstars named Kobe, Carmelo, LeBron, Wade, and Durant, players need the money to keep up their lifestyle. And oh yeah, we all know how precious one year of an elite athlete's career truly is. Ask players like Chauncey Billups, Tim Duncan, and Steve Nash who need every moment before father time tells them it's time to hang it up.

So who are you blaming?

Everyone! There is no basketball, and yes, I'm at the point of anger.

But, it doesn't matter.

But through it all, ultimately, we the fans are the biggest losers.

Now excuse me, I have to preview a freshly printed St. John's basketball schedule.

The yearn for basketball, and most importantly, panic, has set it.