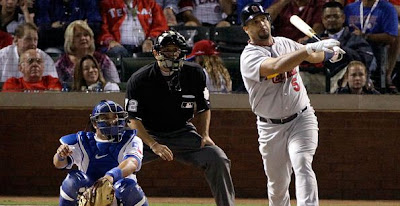 Everything is bigger in Texas.

And Albert Pujols proved that last night with his performance in Game 3 of the World Series.

If going 5 for 6 with three home runs and six runs batted in weren't enough, Pujols' first home run probably would still be traveling if it didn't careen off the facing of the left-field upper deck at the Ballpark in Arlington.

With all of the talk about baseball needing to revamp the World Series somehow to increase TV ratings, last night's game was a clear testament that the game doesn't need any gimmicks or tricks to draw interest, just sheer star power and talent. And as much as this year's World Series lacks the big cities like New York and Philadelphia, it has two great teams with great players, including the greatest player in the game in Albert Pujols.


Pujols' performance last night was without a doubt record setting and monumental. Being added to a list with Babe Ruth and Reggie Jackson while setting records with video game-like numbers such as 14 total bases in one World Series game is exactly the remedy the World Series needs. Last night's game was more than a historical one, it was an eye opening one for many, many people.

1. Die hard baseball fans finally get to say a huge "I told you so" when it comes to the argument of greatest athletes playing today. (Warning: LeBron James shot coming...) Lebron James may get the recognition and may have the star power with all the hype surrounding his potential, but nobody - NO ONE - is putting up the type of numbers and having the kind of career that Albert Pujols is having in their respective sport. He will one day go down as one of the best players to ever wear a baseball uniform, and oh yeah, may be close to adding a second championship to his resume.

2. Casual Fans can finally get to know "The Machine" or "King Albert". Due to the regionalism culture of baseball, a guy like Albert Pujols can go unnoticed. However, fans can finally see that baseball has a guy. That guy. And he is not hype, but very much worth the watch.

3. This one is a huge wish - Major League Baseball finally gets behind Pujols and makes him one of their faces of the game. I've been clamoring for this for years, and maybe it takes a performance like last night to get it done.

4. Although adding pre-game and post-game shows, musical performances, highlight packages and earlier start times to the games could all add to the health of the game, nothing, absolutely nothing, beats the best players on the biggest stage of the game performing like Albert did last night.

All in all, Pujols is a rare talent that somehow has not gotten the recognition of other athletes. His performance last night was something I am glad I was able to witness live as it was happening. Hopefully, his performance is one that will cause several other reactions to occur, including a cease to the constant clamor for overhauling the game's biggest stage.