The 800LB Pound Gorilla In The Nation 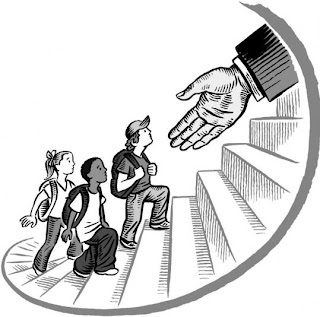 The United States of America falling behind in the Global Education race has been the 800lb Gorilla in the nation when it comes to domestic issues and policies. For years, our nation has kept this issue hushed in an attempt to wish it away by not acknowledging it or embracing it. Somehow, we believed turning a blind eye to the issue us the best way to deal with a problem that has only grown in severity as the informational age explodes.  Today, the issue is no longer deniable, ignorable, and avoidable. The future of America is in great danger. And while the current economy is the biggest threat, the production of the future minds of our nation is a driving force.

Every time I drive past my High School here in Brooklyn, NY, I shake my head in despair when I look at the building. See, my High School experience was an interesting one. While it taught me many valuable lessons about people, relations, and the real world earlier than the young adult would, that building deprived me of many opportunities and experiences a High School Student should have. The type of experience a High School student ought to have. The type of experience I saw so many times on television. Instead, my experience was riddled with overcrowding, fights, violence, poor teachers, lack of materials and books, and most of all, bureaucratic and political nonsense. Now, the once Canarsie High School is under a new system under experiment by the New York City Board of Education, splitting the school into three smaller schools.

I wouldn't be surprised if Canarsie is amongst the nation's list of dropout factories.

Now, in no way am I bitter, after all, unlike many of my classmates, I graduated high school, college, graduate school, and have managed to do alright for myself. In fact, after meeting others from different areas of this great country and sharing our high school experiences, I realized that it wasn't the aesthetics of the building, the materials provided, or the location of the school that determined the credibility of the institution.  Instead, it was a system, an entire national system, that is failing our youth.

Recently, I had the opportunity to watch a documentary I've been eager to see titled, "Waiting For Superman". The documentary is one that I highly recommend any teacher, professor, or educator - and every parent - to view as soon as they can. Waiting For Superman takes an in-depth look at the United States education system and examines how broken the system is, alternatives to correct it, and why such alternatives are never sought due to teacher's unions and political lobbying. The documentary also follows several families in different areas of the United States and their struggles to find the right education for their children.

With the 2012 elections coming around, education reform is rapidly becoming a very personal issue for yours truly. The next presidential term must have education reform on the priority list, and not just a bullet point and feel good message in a State of the Union address. Bill Gates has gone on record in Waiting For Superman as well as in the press stating one of the reasons for poor job growth in the homeland is due to the lack of qualified individuals here in the states. When only 30% of our population are qualified for the available job pool, what does that say about our progression? What does that say about our future?

Some other jaw-dropping statistics for thought:
And those are just a few of the numbers and statistics presented from Waiting For Superman and other various public data.

One specific and insightful statement made in the documentary by Geoffrey Canada, educator and President of the Harlem's Children's Zone, was his address on breaking stereotypes surrounding the minority community. Paraphrasing, Canada presented the facts that the average minority child in the United states through the 6th grade was a B+ student. Heading into 7th grade, they become C+ students, and the numbers slowly work against them as they become older. "Why is that?", Canada rhetorically asks. He then followed up with a passionate statement:

"The system is designed to fail these kids. The system is designed to fail a lot of kids. All children. There's a contradiction here. This is an urgent issue that can't wait for change. We've got to help our children right now. But we also have to be committed to this over the long haul because this is a complex problem that is going to take a significant amount of time to fix."

The time is now to begin education reform. And after years of being against proposed Government-run education, the current situation has been persuasive that such a design would present a better solution than the messy disorganized education system we currently have in place. Heck, in a perfect world, or if I were granted one wish in this system, it would be to eliminate the teacher's unions. The teacher's union is a huge roadblock in the overhaul of education in our system. The mere fact that teachers are granted tenure after two years and are not paid based upon performance is a disservice to our country, most notably, our youth.

How a terrible teacher who has remained in the system for two years, is granted tenure, and cannot be terminated is unconscionable. Much worse, how that same teacher is compensated comparably to the teacher changing lives everyday is downright criminal.

Waiting For Superman is the dose of cold water and truth serum this nation has needed for so many years.

Once again, I highly recommend the gripping documentary.

With our nation's future in question, it is time to call for focus, reform, and an overhaul to our education system. With the already built-in challenges of various sociological factors facing our children today, it's time to wake up, and acknowledge the 800lb gorilla in the nation - education is the only way. And a change in the United States education system is necessary as of yesterday.

"If someone is heading down the wrong path, he doesn't need motivation to speed him up. What he needs is education to turn him around"