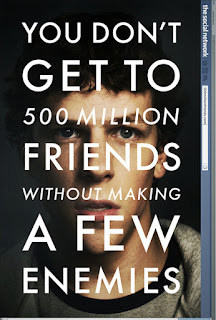 The story of how the historical social network site, Facebook, was founded.

After supporting Zuckerberg and putting up his own money to help get Facebook off the ground, Eduardo Saverin learns that the investors, Parker, and Zuckerberg all set him up to sign papers that drastically devalued his share in Facebook.

The Social Network is an interesting film. Initially, it is very intriguing because of the topic, Facebook, a topic almost everyone can connect and relate to, creates a natural connection with viewers. With the hook and interest there, the film is one that is well produced. The film exhibits great acting, dialogue, and intrigue by letting the viewer in on the founding story of the mega social networking site.

More specifically, Jesse Eisenberg's portrayal of Makr Zuckerberg is amazing. His ability in the role as the weird, quirky, know-it-all, yet sarcastic mastermind was one that well deserved the many Oscar nominations and recognition from the academy.

However, where The Social Network loses a bit of it's flare is it's inaccuracy in presenting the story. While it is understood that for film purposes a few aspects must be Hollywood-ified, receiving a somewhat half-truth of the story is a bit unsettling, and takes away from the film.

All in all, The Social Network is good watch. Great acting, superb dialogue, and an interesting story that will connect with just about anyone (if you are able to look past the skewed stories and character embelishment).