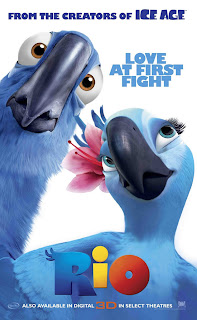 Blu, a domesticated macaw bird from Minnesota is off to Rio de Janeiro, Brazil in order to save his species by meeting, an independent macaw, Jewel. After meeting, the two embark on an adventure to reconnect with Blu's owner, but end up having an adventure that will change their lives.

Blu and Jewel are taken to a local spot where other animals meet up to have a good time. After the music begins to play, Blu finds himself beginning to dance and move beyond his control.

Jewel: Luiz is a bulldog?
Luiz: You got something against dogs?
Jewel: I do when they're drooling on me.
Luiz: It's a medical condition!

Rio is a great wholesome family animated film. Nothing over the top or crazy about Rio, just a band of feel good characters with an interesting underyling plot which serves the purpose of the moral of the story - love coming from strange places.

Rio has a similar plot resemblance with Madagascar, yet, really stands out with it's vibrant characters which are full of life, and most of all, very funny. Albeit, it is kid-friendly-kind of humor, it still resonates with an older crowd in a trip-down-Saturday-morning-cartoons sort of way.

The voices of Jesse Eisenberg, Anne Hathaway, George Lopez, Wanda Sykes, Jamie Foxx, and Will.I.Am lend a whose who of voices for the cast.

Rio is a nice G rated film for those looking for simple no frills-type of entertainment for an hour and half.