The Most Complete Athlete of All-Time 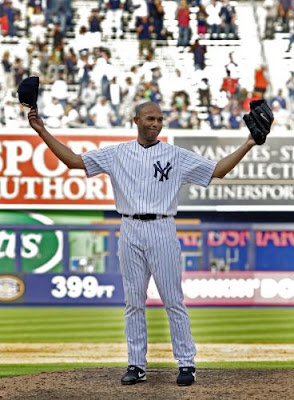 September is gone. 9.24 is over. The Unity Road has ended.

October is here, and the playoffs have begun. Time for yours truly to get back to the real world, and various topics and subjects that need to be pondered. One of those topics being the 602nd save of Mariano Rivera.

While yours truly has suffered from severe tunnel vision on my own Unity Road, Mariano Rivera, the greatest closer of all-time, slammed the door shut on some poor team baffled by his wicked slider, to become the all-time saves leader in baseball history. And as late as this piece is, there was no chance of me letting that event go without acknowledging it here on the DP. Besides being the greatest closer of all-time, Rivera is the greatest pitcher that yours truly has ever seen in a lifetime (yes, really), and of course, my favorite athlete ever since I was a 12 year old boy.


Rivera, I always believe, is a rare example of a once-in-a-lifetime talent that we will never see again. It may sound sacrilegious in context, but Rivera is in the same class as Michael Jordan. His high rate of success in a game of failure, not to mention, his incredible cut fastball that has yet to be duplicated or understood by opposing hitters even at the age of forty-two, is a small testament to that. I've always said, God willing, if I ever were to have to explain Mariano Rivera to my son, he may very well think I'm fibbing or exaggerating.

Son, there was once a closer for the New York Yankees that pitched until he was forty-four. This pitcher had one pitch that was untouchable for his entire career. Everyone knew he was going to throw it, and the entire league, well into the latter part of his career, could not figure it out. And that includes decreased velocity. He was untouchable. Amazing. And very well one of the best pitchers the game has ever seen.

Nonetheless, what always attracted me to Rivera was not just his incredible ability, but his humility and his commitment to his faith. It is rare, downright, non-existent, to find an athlete the caliber of Mariano Rivera that is as humble, even keeled, and relative as he is. While being the best at what he does, he still tells writers, teammates, fans and the press that he simply wants to be known as, "one of the greatest people you've ever met". And that is supported with so many stories of Rivera helping out young players, treating members of the press with the utmost respect, and giving back to his native land of Panama every chance he gets.

And how can we forget his reaction to having the greatest cutter of all-time recently?

"God gave me this pitch for a reason. I just hope I used it to glorify him".

One of my greatest memories of Rivera actually came during one of his lowest moments in his career, where Rivera's character really shined through. After blowing the save in Game 7 of the 2001 World Series against the Arizona Diamondbacks, Rivera sat at his locker and answered every question with respect, thoroughness, and class. Not once did he react to some of the repeated or thoughtless questions by the media. Not once did he focus elsewhere as a misdirection to addressing the issues and questions at hand.

His integrity is what truly sets Mariano Rivera apart from the rest of today's all-about-me celebrities.

And as his career continues, into his forties, I now have learned not to take Mariano Rivera for granted. Despite his continued success and his battle with father time, a battle no one has ever won, Rivera like much of his career, is proving that he is the exception - as a talent, and as a great person.

Quite frankly, he is the most complete athlete of all-time.