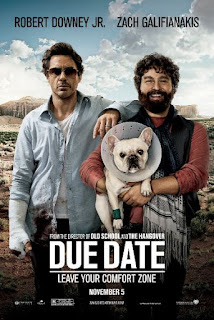 Peter Highman, a high-strung, busy, and aggressive architect, who is also a father-to-be is forced to hitch a ride with a quirky amateur actor, Ethan Tremblay across country. Their journey is a wild and chaotic one in order to make it in time for the birth of Peter's child.

After being beaten up by the handicapped Western Union clerk, Peter gets cleaned up in the bathroom and accuses Ethan of not having his back in the fight. He gets on Ethan for not even being a real actor, then puts him to the test of acting out various scenarios to which Ethan responds with very vanilla-like performances for each scenario.

[talking to a can full of his dad's ashes]
Ethan Tremblay: Dad... You were like a father to me.

Review:
Due Date is a film from the same director as The Hangover, and from the overall feel and plot of the film, it is visible. However, Due Date delivers a wittier and less raunchy film that is just as funny, and lends itself to the growing compilation of work under Zack Galifianakis' belt.

Where Due Date shines the brightest is in the dialogue between the characters of Peter and Ethan who are traveling across country. The film really depends on the interaction and relationship of the two for the comedy, with many, many, many one liners and hilarious statements, and some ad libbing of course, coming from the focus.The dialogue without a doubt, makes Due Date a high recommendation.

Due date is not a classic must have by any stretch of the imagination as it does have its flaws and has a very basic, "we've seen it before" plot. However, as stated, and can't be stressed enough, the relationship of Peter and Ethan are well worth the watch to be entertained.

Recommended for those with a great sense of humor.