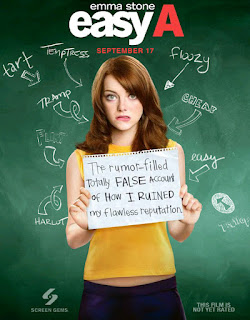 A clean-cut intelligent teenager uses rumors and gossip to advance her standing and finances while helping others.

Just about any scene with the entire Penderghast family.

"I don't know what your generation's fascination is with documenting your every thought... but I can assure you, they're not all diamonds. 'Roman is having an OK day, and bought a Coke Zero at the gas station. Raise the roof.' Who gives a rat's ass"

Rosemary: Not to mention how have you been dressing this past few day. No judgement, but you kind of look like stripper
Olive: Mom!
Dill: [to Olive] A high-end stripper, for governors or athletes.

Easy A is a surprising film that also has a very good moral. The overall plot of a teenager losing control of a lie which eventually grows into a destructive rumor has been done many times, but where Easy A differs is when the plot sees the teenager use her ruined image and the school's rumor mill to help the self esteem of others. In a clever way, the character of Olive Penderghast becomes a unique Robin Hood version of High School gossip. A clever, clever plot twist that is sure to keep you entertained and engaged.

Easy A is also very witty in content and dialogue with interesting and entertaining characters.

Emma Stone's work as Olive Penderghast is also very good, and one that truly helps the film. Other supporting actors such as Amanda Bynes, Thomas Hayden Church and Lisa Kudrow, pitch in with their portrayal of the High School' wacky characters.

Easy A can be easily typecast as the usual teen movie with the prototypical plot line by the film's trailer. However, that view is far from the truth as Easy A is solid film that is not only entertaining but reminds the viewer that perception is often nothing but gossip and rumor.

Very much recommended for the 92 minute run time.