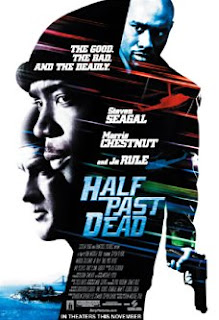 While going undercover in a hi-tech prison in order to exact revenge on those who killed his wife, a man becomes wrapped up in a plot involving the FBI and a $200 million pot of gold.

During a normal day at the prison, a rogue squad breaks in to begin their plan to hi-jack the prison and hold several important people hostage.

Lester: The rumor is you went half past dead and came back.
Sasha: Yeah!
Lester: Took a ride on the flat line for 22 minutes... and lived to tell. Thought we could play some cards and talk about that.

Steven Seagal films are never Oscar contenders, but most are watchable, with a few being the occasional cult-like blockbuster. However, Half Past Dead is one of Seagal's swing and miss for his career.

Half Past Dead sports poor character development, unbelievable situations, a very confusing plot, cheesy lines, and poor acting. It's the type of film that will leave you scratching your head and squinting your eyes in disbelief.

The soundtrack, camera shots, and the occasional action scene is the only thing that saves this movie from being a shutout.