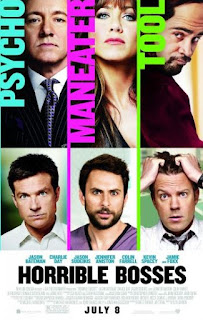 Three friends who have friends that make their lives miserable, come up with a plan that goes awry to kill their bosses.

After driving to a rough part of town in order to find a hitman, the three conspirators sit down with who they think is a hitman.

Review:
Horrible Bosses is a surprising film. Surprisingly funny. The film during it's release and from its trailer, had that feeling of just another crash written, Hangover-styled, vulgar-filled attempt at comedy. However, while the film does include some of those traits which doesn't completely ruin the film, Horrible Bosses is a very funny film.

Where the film really shines is the chemistry between Jason Batemen, Charlie Day, and Jason Sudeikis. Their ability to play off of one another seems natural, and creates an honestly funny movie. Add in supporting roles from Jennifer Anniston, Colin Farrel, and the always great, Kevin Spacey.

By no means is Horrible Bosses a contender for an Oscar, but if you have 98 minutes and looking for a good laugh, this film will not disappoint.