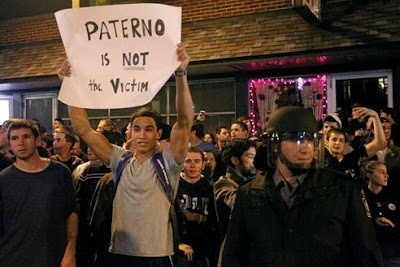 As I sat on my couch this past week watching students on the Penn State campus and many more in the small town of State College, PA chant, protest, riot, and voice their opinions over the release of Joe Paterno, it somehow caused a slight infuriating feeling that forced me to shut it off. I immediately tweeted the following to release those feelings:

"Penn State students who are protesting might be the most delusional human beings on earth right now. Wow. Football? Missing the point, huh?"

Over the last couple of days, I had the opportunity and insight of listening via sports radio to a man from State College, PA who grew up in the area and attended and graduated from Penn State. He discussed the aura and legend that is Joe Paterno and explained just a little bit of the culture in rural State College, PA.  In his precise words he stated, "on our mantle, similar to most of the families in State college, there was a picture of our family, Jesus Christ, and Joe Paterno." Now, to me, that is laughable, but to someone that grew up in that area, I can understand the notion. Joe Paterno has done a lot for the area, the people, the students, and the University.

Yet, watching students demonstrate in a very similar way to how various places in the world would to overthrow dictatorships and for their freedom, the rallies and protests carried a feeling of senselessness, insensitivity, and outright foolishness. In the midst of victims coming forward and facing a situation that robbed them of their innocence (and even their smile), I could not stomach hearing students clamor for their football coach.

Allow me a moment to channel my inner Iverson..."We talkin' 'bout Football?"

In the midst of learning heart-breaking details of the on-going saga, preserving a legacy, and beating Nebraska later today has somehow been a focus.

I cannot imagine how the victims and families affected by that no-good predator, Sadinsky, felt as football, coaching, and legacies were discussed as the focal point of the protests.

Like you, I too have the same thoughts - Joe Paterno had to know, right? After all, these are same men that are not just aware of the trouble their second string defensive back got themselves into before he has an opportunity to confess, but these are the same men that are aware of that fifteen year old sophomore Quarterback in No Wheresville, USA, who is a can't miss blue chipper. I find something like this going unnoticed very hard to believe.

And in the case of Mike McQueary, who actually seen Sadinsky in the act with his own two eyes (!), how can you not stop the action? Say something. Do something. Anything! Wouldn't have taken much to break it up. Sure, you met your professional obligations, but what the heck happened to human decency? That's a separate post for another day, but it bears repeating, where is our society's decency?

Or how about McQeary's father, who offered the, well umm, stupid (no other way to put it other than maybe cowardly) advice of leaving the facility immediately as advice on how to handle the scene and situation he just saw?

How about offering some advice of, GET THE KID OUT OF THAT SITUATION!

If we can witness a ten year old child being raped, and not do anything about it, yet continue to live with ourselves, then we as a society are pathetic. Simply pathetic.

The red flags are all over this story as more details are released from investigations and confessions.

What happened to once Sadinksy Prosecutor, Ray Gricar, in 2005? Rather strange he just disappeared.

Why did the sudden heir to the Penn State Head Football Coach throne, Sadinsky, suddenly resign shortly after being seen with the child in the shower? Suspicious? Very.

And, why did he still have access to the Penn State University facilities and buildings for almost a decade?!

Why did Penn State Police not report the claim? And how did the entire hierarchy and chain of command at Penn State fail to claim the report.

Of course, umm hello Joe Paterno? It is your program, sir.

And yes, the "I could have done more" statement makes everything that much worse.

For some reason, we are making excuses for a culture, for an institution, and for criminals.

Strip away all of it. Penn State. Joe Paterno. Legacies. Football. Even the "culture" of the situation.

What do you have?

A company with a boss that did not object to a former employee using company grounds to molest several children.

That's all there is to it.

And my honest opinion, yes he should have been fired. Anyone of knowledge or tied to this should be terminated and charged as an accomplice.

CHILDREN WERE BEING MOLESTED!

Yet, some have the ability, and nerve, to protest for this person to coach a football game on a Saturday afternoon.

We are indeed, pathetic.