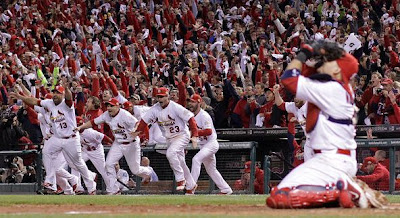 After one of the best World Series in my lifetime, the 2011 Major League Baseball Season is now complete. In a season that gave us many stories, milestones, and moments, the ultimate prize being won by the St. Louis Cardinals is the biggest and most memorable of them all. A team making the playoffs after being seven and half games back of the wild card spot heading into the final month of the season - impressive. A team making the playoffs after being out three games with five to play - remarkable. A team beating the likes of the Phillies rotation sporting names like Halladay, Lee, Oswalt, and Hamels - stunning. A team outlasting the Brewers offense - astonishing. A team that was a strike away from losing the World Seriese - twice! - and managed to win the entire thing - awesome! The 2011 St. Louis Cardinals is a team that I will always remember for their fortitude, their incomparable spirit, and their never say die attitude led by a Hall of Fame manager/innovator in Tony LaRussa.

Here are some other moments that yours truly will remember from the 2011 MLB Season: