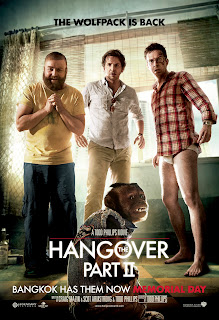 Two years after the infamous bachelor party in Las Vegas, Alan, Stu, and Phil get into trouble again before Stu's wedding in Thailand.

After finding Teddy, and using a speedboat to return to the resort, Alan drives the speed boat right into the resort then proceeds to throw the anchor overboard after the boat comes to a complete stop on land.

The Hangover Part II is another example of a film that cannot meet that of the initial. Sometimes sequels are better left unmade, and while this film doesn't ruin the series, it doesn't match that of the original.

While the plot line of the group being in Thailand shakes things up a bit, the overall plot line of piecing together the night before is now overplayed. THPII tries to do so, and gives a valiant, but still entertaining effort, however, the film falls short of expectations, and is not as entertaining as the original.

As usual, Zach Galifiankis shines and carries the film with another funny portrayal of the character, Alan.

All in all, The Hangover Part II is a decent film that is worth the watch if you are looking for a filler-watch. Yet, be warned, don't expect much.