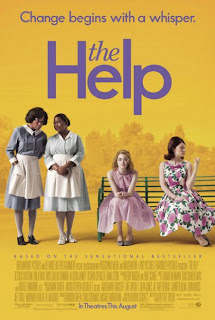 An aspiring author in Jim Crow Mississippi looks to introduce the perspective of black maids that tend to white families, and the hardships they experience.

After being falsely accused of theft and threatened to be thrown in jail, Aibeleen fears for her job and life no longer and courageously stands in the face of the bigot employer, Hilly Holbrook, and calls her a coward.

"If you can love your enemy, you already have victory"

The Help is an excellent film. Based on a novel, the plot will  not only just entertain you, but will stimulate the mind as well as pull on the emotional strings of your heart. The Help has a great feel that captures the 1960's in rural Mississippi which adds to the feel of the film. Such aspects as the language used, the attire worn, the cars driven, the homes in the area, and other little things like the interior of the homes add to the realness of the film. The film exemplified a tremendous attention to detail.

Yet, what really drives the greatness of this film is the performance of Emma Stone, Viola Davis, and Octavia Spencer. Especially, the performance of Viola Davis' portrayal of Aiblieen Clark, the strong-willed maid who watched her son die in the Jim Crow south. Their ability to let the viewer in on serious topics such as Jim Crow laws, the lives of black maids tending to white families, the rarely discussed issue of black maids raising white children, and the strong relationships that grew from the situations, are the backbone of this The Help.

All in all, The Help is an amazing film that is quite the experience in viewing it. A highly recommended watch at the 137 minute runtime.