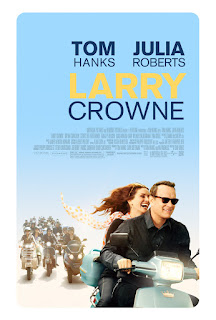 A man who recently lost his job reinvents himself by enrolling and attending college.

After picking up his college professor, who was intoxicated and shoeless at the bus stop, Crowne gives her a life changing ride home.

"I told you how to avoid divorce lawyers. You get married, and stay married."

Larry Crowne is a film that could have offered so much more. With a great plot line that is currently relative, Academy award talent filling the lead roles, and a large budget ($30M), Larry Crowne should have been much more than the development-less film that it was. The film had a plot that was simple, characters that had awful depth, and an overall feeling of shallowness when the credits began to roll in the end.

Tom Hanks did his best in this role as Larry Crowne, however, as was the case with the entire movie, there just wasn't enough creatively for Hanks to really bring the character of Larry Crowne alive. As for Julia Roberts, the character of Mercedes Tainot never really got out of second gear. Once again, greatly disappointing.

Larry Crowne is a huge letdown that has the feeling of a film that was made for a rainy Saturday afternoon on TBS.

Recommended if well...if it's raining on a Saturday afternoon.