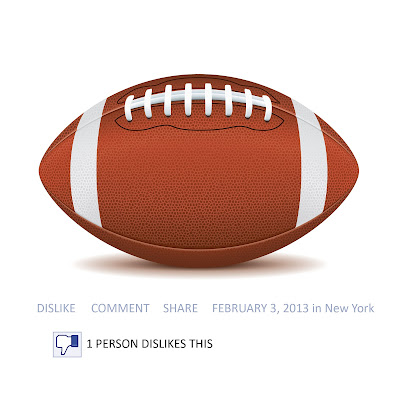 In a year where the DP has branched out to other sites, it's only natural that we have other contributors do so on this platform as well. As one of my goals for 2013, I wanted to have a guest blogger, and decided to go with my tag team partner (my wife for you DP newbies). See, she has an undying dislike for football, and I thought it would make for a good piece, would provide common ground for those that feel the same way, and of course, instant therapy for her problem with America's phenomenon. So without further adieu, here it is:

Last year Mr. Dome Pondering asked if I would act as a guest on his blog and asked me to write notes as I watched my first Wrestlemania.  He later used my notes and incorporated them into his posting.

I thought that may have been the first and last time I was featured but Mr. DP had other thoughts. “Why don’t you write something about how you hate football?!”

I’ve never been a football fan.  I can count the amount of football games I’ve gone to on one hand and the majority was in high school when it was more of a socializing thing rather than a did-you-see-that-pass thing. I want to like football.  Really, I do!  It’s watched by millions of fans every week and last year’s Super Bowl was watched by over 100 million people.  There has to be a reason it’s the most popular sport in America right?  Something I’m missing?

For years, friends & family have attempted to explain to me the ins & outs of the sport.  Even with their persistence & hopeful attitude that I may change my mind about the sport; I’m sorry to say it just hasn’t worked.  To put it very simply, I think football is a really confusing game and there are just issues I can’t get past.

For starters, there are too many players and too many roles.  I can get with the offense, defense, & special teams… but how many “backs” do these teams need?  Quarterback, halfback, tailback, fullback.  Some block, some run, some throw the ball.  I can’t keep track of them all.

And because I can’t keep track, I find that I can’t connect with the players.  Yes, I understand that football is a team sport, but the NFL, in my opinion, does a terrible job promoting their players.   It seems as though unless you are a 3x Superbowl Champ and married to a supermodel ::cough::TomBrady::cough:: then no one really knows who you are.  It doesn't help that the average career of a football player is about 3 seasons, so by the time one does learn the name and position of a player he’s probably moving out and moving on.  This is one reason I stopped following college basketball, but that’s a post for another time.

Next up on this list of mine would have to be the fact that the game itself takes for-ev-er.  As a baseball fan I can’t believe I am saying such a statement, but it’s true. In preparation for this little posting I did a bit of research… did you all know that the average baseball game in the 2012 season took 2 hours and 45 minutes while the average football game takes no less than 3 hours?  How is it possible that a game with structure (4 quarters of 15 minutes each) can take longer than an unpredictable 9 inning game with no game clock?

Now if a single 3-hour game has a hard time keeping my attention, you can imagine how I feel about an entire season of football.  But even worse is that the season doesn't really stop after the last game or even after the Superbowl.  A season of football is supposed to last four months, September-December.  But once you add in training, preseason, playoffs, and the draft, the season coverage expands to about 9 months, and remains in the headlines all year round.  Yeah, yeah, yeah, it’s Americas #1 sport…but it’s not the only sport out there.  And its certainly not fair to other athletes, who are playing hard and making top ten plays, to not be featured in the top story of the night. I don’t care to turn on ESPN’s Sports Center during the middle of the NBA Finals and still see anchors talking about the Super Bowl. I can’t be the only one, right?

So…there it is, a few of the reasons I don’t really care for football.  I have surprised myself this past year and have sat and watched a game or two, nevertheless the outcome remains unchanged … I just don’t like watching the sport. I find that I’d rather sit and watch basketball or baseball… or soccer (a sport actually deserving of the name “football.”) but considering none of those will be on tonight, it is Super Bowl Sunday after all; I will probably find myself sitting watching some of the game, all of the commercials and definitely the halftime show.

Hope you all out there enjoy the game tonight.