Having That "Garden Game" 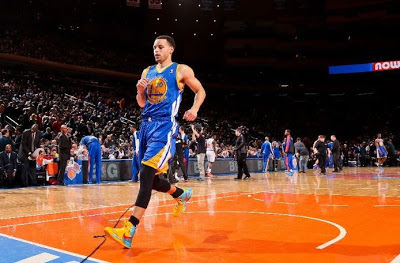 As a Knicks fan, it's hard to really appreciate those "Garden Games and moments" that visiting players have when they come into our house. Over the years, I've seen so many, from Jordan's double-nickel game, LeBron's almost triple double during dream week, Kobe setting a new building record with 61 points, and oh yeah, watching Reggie Miller score 9 points in 8 seconds.

I know...it happens. And honestly, I hate it. I despise it. Because, as a Knick-lifer, my team is always on the other end of it, and it makes it really tough for me to enjoy the performance.

Over the past few years, especially during the nightmarish Isiah years, it happened too much. After taking a break from playing second-fiddle to what felt like touring shows that came into the famous building on 34th and seventh avenue, Steph Currry happened tonight.

Of the many years of watching MJ, LeBron, Kobe, and Reggie destroy us, thus having their "Garden Games", tonight's effort by Steph Curry, even for a few moments, caused me to suspend my growing case of agita, and simply laugh in disbelief of what was going on.

At one point, I simply heard Alicia Keys' voice ringing in my ear...

Curry was launching shots the way some would in a videogame by mistakenly tapping the shoot button, and was STILL sinking them. One after the other. Fast break pull ups. Spot jumpers. Shot clock buzzer beaters. Loose ball throw ups. Everything was falling through the cylinder  EVERYTHING. I literally was just waiting for Curry to turn and do his imitation of Jordan's shoulder shrug.

I've had my experiences of being in the zone on a basketball court where the rim looks like a backyard pool, but this performance was just unbelievable. Too unbelievable. One that I can't even imagine how it must feel to be in his shoes during the game. And once again, this coming from a Knicks fan that endured Jordan's MSG wrath.

Sure Carmelo finished with 35 points and 8 assists, Tyson Chandler with a man-among-boys-stat of 28 rebounds, and after being lit up like a Christmas tree by a super powered Steph Curry, Raymond Felton came up with three huge plays, but the story was number thirty for the Warriors and his terrific performance.

Just like the millions who dream of it, the hundreds who imagine it, and the handful who have lived it, tonight, Madison Square Garden brought out the best in a talent who had his "Garden Game".

Except his team loss.

And that's the type of Garden Games I'll take. Every. Single. Time.