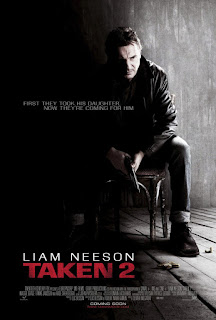 The group that originally kidnapped his daughter return for revenge on Brian and his family.

After recognizing the group is after him, Brian is finally cornered and caught. The group eventually beats him down into captivity.

Bryan Mills: I have to find them... and bring your mom back. And then I have to make sure these people never bother us again in our lives.

Kim: What are you gonna do?
Bryan Mills: What I do best.

Ohhhhh, Taken, Taken, Taken. If the original wasn't notorious, the sequel really tried to top it's over-the-top  reputation. And quite frankly, it succeeded. After all, how often can this family be kidnapped? Hopefully there is not a Taken 3.

It was really hard to even get into this film even after having serious doubts about it. Taken 2 really delivered on cheesiness, poor acting, terrible dialogue, and a awful plot line. I'm not sure how many times I rolled my eyes or exhaled in cynicism while watching this film. From Brian placing his daughter in danger, him not really reacting to his wife's capture in urgency, his daughter suddenly going from failing her driving exam to driving a manual car at high speeds through the streets of Istanbul, or the pathetic fight scenes attempted to be hidden by quick camera cuts.

Taken 2 really offers very little to move you, other than what it's reputation offers - a movie so bad you have to see it and laugh.

If you're interested in very bad movies, then you should check this out at least once. If not, keep moving, nothing to see here at all.