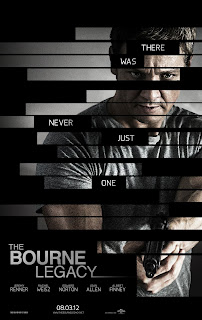 The Treadstone saga takes a new turn as it includes and affects other programs, and other agents who are now a threat to uncover those who were involved.

After U.S. officials realize that Dr. Shearing and Aaron Cross are in the Phillippines, they deploy one of the program's last remaining agents, Lorax, after them. A chase scene develops throughout the streets of the Phillippines.

As a huge fan of the Bourne series, it was very hard to have faith in the next edition without Matt Damon, and director, Paul Greengrass. I was afraid like any other fan that it would slide into what the Bond series offers with different actors playing Jason Bourne. And of course, if they didn't, I was really worried about where they planned on taking the story of Jason Bourne and Treadstone.

Well, The Bourne Legacy went the latter route and introduced a story of an alternative program and other agents that were tied to Treadstone and Jason Bourne. They included images and mentions of Bourne, which was cool, but really failed to truly introduce Aaron Cross, which is my biggest complaint about the movie.

Although the new story of green and blue pills, and specific enhancements does make sense, the movie really fails to let you in on Aaron Cross, they way you were able to connect Bourne. I don't think it was necessarily a talent issue, as Jeremy Renner and Rachel Weisz were okay, but that of a script. The action scenes were awesome, the story tied in well, but the journey of them attempting to "max out" Cross on enhancements seemed shallow. Bottom line: The Bourne Legacy just never seemed to get to that gear the first three did.

The Bourne Legacy just seemed like a movie (especially how it ended) that focused more on framing the groundwork for the future, rather than focusing on the current plot for the film. If there is more to come (and I hope there is), I guess it can be understood a bit more.

However for now, as a stand alone film, The Bourne Legacy is a very good film. It does not measure up to the first three, but does give hope for potential future films.