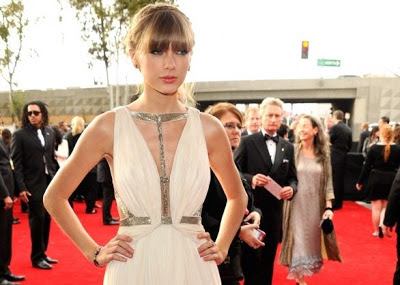 When did Taylor Swift become the focus of all of our celebrity venom? For a talented young woman (let's put down our weapons on cynical insults for a second and admit she can do things we all can't), Swift has quickly gone from the next big thing that Americans simply adore, to the reason we roll our eyes whenever she is on camera, or in a story. Swift is no longer that sympathetic figure that was humiliated when Kanye West, you know, the old focus of our celebrity venom, decided to embarrass her at the MTV Video Music Awards.

After last night's Grammy awards, and all of the notable pairings, outfits, and candid moments discussed by those who really get into awards season, the consensus hate for Swift grew and grew to a high that caused me to take a step back and examine the entire situation.

America, this obsessed, celebrity-crazed society we live in, we love to build people up and tear them down, just to witness the emotional comeback. We're sick. We're twisted. And for some reason we play these games with our celebrities for own demented pleasure. (see: Brittney Spears). We launch our criticisms and vitriolic comments at them as if their lives are also on stage for us. Albeit, Sometimes, they are. However, it is us who give them that power. Even turning honest moments into reasons for hate.

Want an example? How many of you were annoyed that CBS cameras kept showing Taylor Swift during every awaken moment of the Grammys? Now, how many of you became annoyed with Swift because of this?

I know I did. Actually, I very much was.

I can only imagine the show producer in the headset of those who were in the truck...

Mumford and Sons are performing, let's see if Taylor likes them!

Wiz Khalifa is on stage, let's see if Taylor is dizzy from his outfit!

During the tribute to Bob Marley, let's see if Taylor is digging it!

And of course, sheep like me - and to an extent all of you - are sitting there screaming, "why do they keep showing Taylor Swift!!!"


After all, I'd be a huge hypocrite if I didn't say I too haven't taken the cynical route with Swift. After all, she bear honorable mention for several DP Pondy Awards this past year, including the always popular, "Just Go Away" award of the year (won by fellow Grammy attendee, Rhianna and Chris Brown).

I respect Swift. I do like her as a complete talent. Really, what's there not to like? I always have a soft spot for those who write their own music, and for those who can play instruments - guitar, piano, drums, etc... Swift at a young age has both gifts. And whether you dig her music or not, you have to admit she can indeed sing.

Personally, my gripe with her are her now flurry of songs about ex-boyfriends and old flames. I know writing from the heart makes for great music, just ask Usher and how that worked for him on his Confessions album, however, there comes a time when it gets to be too much. We also saw this from Mary J. Blige who stretched out her run of songs about escaping a bad relationship over three albums. We got it. Got anything else?

Which leads me to what possible can be now known as the Swift Celebrity syndrome (SCS), or at least, I'll coin that for future reference here on the DP. And that refers to celebrities who have become so overbearing and completely overexposed to us, that we now want to tear them down with everything that we have. And if we do so without too much resistance, we'll eventually rebuild you the way in which we want to.

It wasn't too long that we saw this with other celebrities such as Beyonce who seemed to have released 56 albums in two years at one point (clearly i'm exaggerating, but only by a little...), or even the aforementioned Kanye West, whose made-for-tabloid headlines continually leaked into our evening news. After a while, the public revolts, and in some cases, bites.

Even Beyonce needed a break, via her baby, and now Kanye via his pending child as well. And there was also Kim Kardashian, Snooki, Tom Cruise, Brad Pitt, Angelina Jolie, and others who either developed SCS, or had happenings (usually children) that forced them to take a break from being constantly in our face before the public push-back began.

To avoid Swift Celebrity Syndrome, America simply needs a break from you.

In show business, they say, always leave them wanting more.

Swift, with with her overexposure, her annoying redundant of ex-boyfriend songs, her on-going love life playing out in the public eye, and now her fading approval, is stricken with SCS. And unfortunately, she has no baby on the way (which if it did happen, would ironically KEEP her in the news) And we - all of us - are poised to begin tearing her down.