Christianity Decline Is On Own Believers 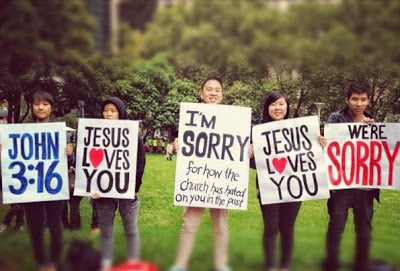 To say that the social reputation or acceptance of faith in our society is at an all-time low is very accurate. When it comes to faith, spirituality, or even that now overused and negative sounding word of "religion", there seems to be a concise eye-roll, mockery, or even the wave of the hand gesture signifying, "it's not for me".

Today we see a growing percentage of Americans who consider themselves athiests, non-believers, or even a part of other forms of spirituality in which they live their lives. All religions are now seen as something that limits the mind, rather than guiding the soul.

This is especially seen in the reputation of Christianity which has gone from household mandate in the early part of the 1900's to now being the focus of hate, hypocrisy, ridicule, and sheer passable acknowledgement in it's existence.


Christianity has literally become the antithesis of what people want to be, to be a part of, or live their lives according to.

And that's hard for me to admit, especially as someone that identifies as a man of faith. As a follower of Jesus Christ. As a Christian.

But it is true. And to accept further truth, all of it is at the hands of who else? Christians. People of faith.

Sure, as our society moves away from faith, becoming more liberal in beliefs, morals, and ethics, this can be seen as a correlation for the sudden turn.

Or maybe its the vile and vicious arguments over same-sex marriage.

Somehow, the issue of same-sex marriage always seems to boil down to two sides, and on the anti-same sex-marriage side, are Christians. Or supposedly they are Christians (Looking at you Westboro Baptist Church). With the same-sex marriage movement so strong these days, there is very little wonder those who oppose - in that role are yes, Christians - are seen in a negative way. We are seen as attempting to step on civil liberties. We are seen as a group of hate.

And to be honest, both sides - yes, BOTH sides - are highly intolerable of the other. As I've said, tolerance goes both ways (How We All Mishandled The Jason Collins Announcement). But that's another topic for another post.

One last thing...the media sure doesn't help the issue of tolerance either, but I digress...I promise. That's it. Getting back on topic...

It is fair to say that the way Christians have handled the topic of same-sex marriage has been a contributing factor to the current worldly view of the Christian faith. I understand it is a topic that contradicts the values and morals of the faith. Believe me, I get it. However, why the strong, and sometimes viscerally emotional, fight against this topic when there are so many others just as bad?

Without getting overly evangelical, isn't sin, simply that, sin? Non greater than the other? Through the good book, that's how Jesus proclaimed it to be. Why is same-sex marriage such a focus for some, but not the issues of abortion, murder, or adultery. Or how about lying, cheating, addiction - alcoholism, drugs, pornography, gambling?

God is love. And in my honest opinion, Christians have taken such an attack approach to this issue, they have forgotten to do that very thing - love.

Somehow, Christians went from loving all and hating sin, to simply hating those who sin. And there is a fundamentally - and monumentally, gargantuan! - difference between the two.

There are also the counterfeits.

The constant picketing, derogatory name calling, and the ever popular, "God Hates Fags" signs, staples of the Westboro Baptsit Church's agenda, are so far away from what the faith represents. I truly believe every knows that, but won't acknowledge that, because it wouldn't help their cause.

The Westboro Baptist Church, much like everyone right now in regards to same-sex marriage, or any other form of civil rights, will use whatever they can to get their point across. Sadly, Christianity is caught in the crossfire of this on both ends, and no one will or has stopped to care or think it through.

And without further picking on the Westboro Baptist Church further, there are other groups that use the name of God and Church to cover for their agendas and misleading opinions. And because those opinions are so drastic, so extreme, so controversial, and so contradictory to what seems to be a movement towards same-sex marriage, these groups will continue to receive national coverage. And continue to misrepresent the Christian faith to others.

Let's be honest, even if you are an Atheist, honestly, do you really believe a person of Christian faith would do such a thing? The same as I won't expect something as equally outlandish from an Atheist.

However, in this war for civil liberties of our choice, we'll all use what we have, to get the victories we can, without really thinking about how it truly affects everyone as a whole.

How about the growing trend of non-believers?

Atheism has slowly become the rage thinking today, as many have come to question God's existence, his authority, or flat out choose not to acknowledge Him. Under some parameters and in some circles, some identify as Atheists simply not to be bothered with the entire realm of life that includes spirituality.

I've given my thoughts on this in the past (Confused on Atheism Belief/Movement), and I will leave it at that.

The rise of Atheism has affected Christianity greatly, as the overall perception of Atheism is that it rivals Christianity. It denounces Jesus Christ, and it looks to prove God as a myth.

I'm sure any Atheistic person would fill you in that it does not believe in any Gods, whether of Christianity, Islamic, Hindu, Jewish, Satanic, or whatever sort-of-faith.

But again, Christianity is front and center, and is in the cross-fire of it all.

And we've done very little about it except bicker and look for ways to win arguments and debates, rather than souls of interest.

And then there is the self-inflicted kind of hurt.

The kind in which Christians have done significant damage representing the faith. Lets call it what it is, Christians have helped in the process of creating a social barrier between themselves and "the rest of the world". A barrier that isn't too inviting.

It's all too prevalent now where Christians are either becoming too judgmental of others, or are simply leading hypocritical lives in contrary to the faith they should be representing for others.

I understand and believe that only God can judge us, but at the same time, there is a certain standard, in representation of your faith and our God, you should maintain.

[sideblog: Somewhere along the line "Only God can judge us" went from a decree of preventing judgement among us to becoming a statement for a  free pass allowing us to do whatever it is we want to do.]

The Christian community is failing in epic ways in this facet. Why consider another way of life, if that way of life offers nothing of difference to what you already know?

Sadly, it pains me to see so many people walk away from faith, from spirituality, and from something I know is the greatest thing in life a person can attain.

But as a Christian, I have no one else to blame for this massive revolt away from it.

All I have to do is look at my fellow believers. We - all of us - share in the responsibility of it's decline in America.