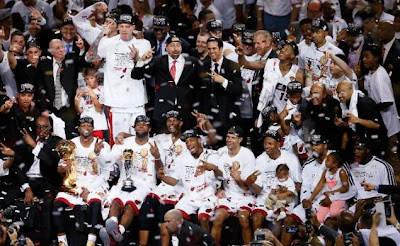 What a year the NBA had. It was thrilling, compelling, record-setting, and downright gripping. And for the first time in many, many years, even my Knicks didn't drive me up a wall! Sure, the playoffs gave me agita as expected, but looking back on it all, I would say I was very satisfied with the season of my boys in orange and blue.

As for the eventual champs, what can I say that wasn't explained in my post following the Miami Heat's win (Another Heat Title Leaving Jordan-like Impressions)? I respect them. But I still loathe them. Just being honest. But once again, how can you not tip your cap to a twenty-seven game winning streak, that tremendously hard fought series with the Indiana Pacers in the Eastern Conference Finals, and of crouse, being one rebound away from losing in six in the NBA Finals? Resiliency at its best.


Nonetheless, here are some other tidbits I came away with from this year's 2012-2013 NBA Season:

Funny how the narrative can change in a few seconds, huh?

Such a great season. Cannot wait until November.