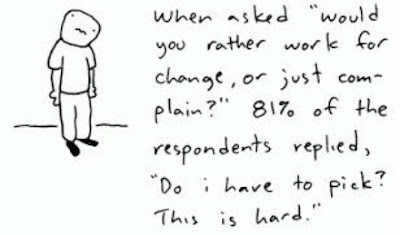 There really is not much I can say in regards to the acquittal of George Zimmerman this past Saturday. The charges of manslaughter 2 were a bit much by the prosecution as well as the underwhelming convicting evidence presented throughout the case. And honestly, there was always that feeling that you knew - you just knew - there was no way things would workout the way it should.

Similar to the Casey Anthony case (Unbelievable: The Casey Anthony Verdict), by laws of the land, Zimmerman was not guilty, but in the court of popular opinion (and common sense), he is. We all know what happened.

As the dust settles on what is sure to be a case we all will remember, I really have no further reaction to the case. None. There is just too much out there for me to bring anything new to the table. Plus, I said my piece last March (Same Old Script With Trayvon Martin Case). And truly, still after a year has passed, those words still represent my opinion.


However, what I would like to react to is the sudden interest, or empty interest, from many.

Suddenly, fighting the good fight for Trayvon Martin is the "in" thing, and many have used social media to get their point across. Awesome. I very much support more people being politically and socially involved on an educated level.

From the pictures, constant statuses of being angry, and the changing of profile pictures to a black box, the movement in my opinion, is empty. Yes, empty.

Quite frankly, it's empty in it's production, empty in it's meaning, and reeks of what social media has done to our generation in turning every situation into an opportunity about self.

A friend of mine whom I went to High School with and is world traveled, had probably the best reaction to this issue:

"Changing my profile picture black won't bring Trayvon back from the dead, won't put Zimmerman in jail, won't accomplish a damn thing but make me look cool on social media. If you want real change do some physical action like go lobbying, peaceful protest, or something else proactive. If you feel so strong about the cause then putting up a picture on ig or Facebook isn't the way. Just my 2 cents, don't agree with me, it is what it is."

Couldn't have agreed more. He was later peacefully protesting as part of the Times Square demonstration here in NYC.

And I won't rant too much on the usual pundits like Al Sharpton and others who use these situations for their own publicity. You know, the types that only seem to care about these conflicts that are of national attention.

I have very little care in the world for them.

Off the heels of the verdict, I'm more sad than angry because I feel for Trayvon Martin's parents. I really do. That's the part of this whole ordeal that bothers me. Parents who lost their son, without an answer for it.

In my honest opinion, the best way to change the landscape is to indeed take a look at the landscape. Trayvon Martin was just one of many minority children whose lives will be lost for nothing. Unfortunately, there are so many more that will as well. Some of them at the hands of the same minorities in urban sections across our nation. Just take a look at Chicago.

Change starts with all of us. And for the black community tired of the "same script" in terms of a slanted judicial system, it starts there too. With all of us. Not on Facebook. Not on Twitter. Not on Instagram.

Change is not a picture post, or a declaration. Change is an action.

And that is the only way we can help prevent another Trayvon Martin situation from occurring - through change. Real change.