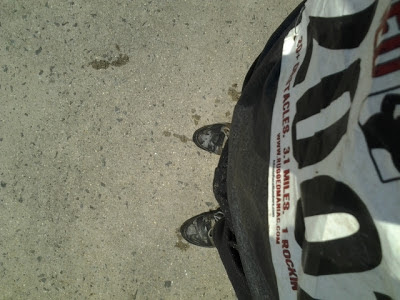 It's not often I puff my chest out and raise my chin up in a certain self-pride that my personality naturally cancels like two inverted fractions (hey! How about that blast from the past).

Nonetheless, we each have those moments time-to-time that make us realize what we are truly capable of when adversity enters her challenging doubts into our lives. And sometimes, those challenges are internal, only self-assuring and gratifying enough to the individual, and for the individual to truly understand.

Over the past month or so I've been suffering through an unknown illness that has really sapped my way of life. In the early stages, I was bed ridden with no energy, enduring several migraines, and the feeling of being, as I told my wife - the tag team partner for you new devotees - two percent. If you can imagine what feeling like two percent would feel like (With 0% being death), that's what I imagined it to be.


Later, the symptoms grew to shortness of breath, lack of appettite, and just overall malaise of not being able to do anything. Literally. Never in my life have I ever fell tired after taking trash out to the disposable chute (mere 8 feet at most from my apartment's door). It really was that bad.

Over the next four weeks, I lost fifteen pounds, could barely get four words out consecutively without coughing due to a shortness of breath, and ultimately, a rapid decline in physical health, as well as mental health due to all of the thoughts going through my head.

Enter my challenge. I've taken a liking to running 5K races throughout the summer as it not only gives me something to focus training for, but I truly enjoy them, especially the obstacle mud runs.

Unfortunately, due to poor timing, this undiagnosed illness not only ate up all of my time to train in the month of June, but probably set me back quite a bit as well.

Skipping the event was 99% my decision heading into the week of the race.

This past Saturday, race day, I was still pretty much leaning on skipping it, yet still unsure if I was going to be able to do it seeing how I could barely do anything without being on the brink of coughing.

So there I was on Saturday morning, standing in front of an x-ray machine getting my chest examined when I suddenly decided I was going to at least try. If I hurl over in fatigue and excess coughing, so what? I showed up, attempted it, and gave it a shot, right? At least I'd show up and pick up my complimentary shirt.

I'm not quite sure why all of a sudden I was infected with a burst of heroism. Foolish heroism at that. Maybe it was the complimentary t-shirt? Probably.

But still, I had to be sure it would be condusive to my health to do so. Gone on are the days such as college, when I wasn't physically right and decided to continue no matter what. These days are different. These days I have more responsibilities. Well, these days I'm actually a bit more intelligent. Just a bit.

So I sat there waiting for the x-ray technician's immediate response. For those of you Friday Night Lights geeks like me, think about the scene in the FNL film where Boobie Miles heads up to Midland for an MRI to see if he could suit up. For a moment, I was able to relate.

"So what does that mean? Can I play? The doctor said two weeks, it's been two weeks, I'm ready to play! When can I suit up?"

Not able to give an "on-the-record recommendation", the examiner simply said to me, "she's seen worst cases".

That's all I needed. I headed home, suited up, and off I went. Fatigued. Tired. Coughing. No prior training. And wondering what in the heck I was doing.

As the race started, I ran 1.5 Miles of the course, including the course's "easier" obstacles of walls, eight foot sand dunes, and hurdles before, it felt like a bomb exploded in my chest. My chest felt like it was 200 degrees, and I began hurling and coughing like a fire victim escapee. Runners and groups passed by looking at what was the combustive car on the side of this race. Some even expressed concern or the usual positive reinforcement to strangers on the verge of quitting which is often seen in these events.

Either way, to make a long story short, I finished the course. Not my best time at all, but certainly - very certain - it was the hardest thing I've ever done physically. Seriously, ever. I'd definitely rank it over my experience of running with torn ligaments in my foot my senior year of college baseball.

To make it all worth while, I got to enjoy a huge 35 foot mud slide to end the race which was awesome. Kudos to Rugged Maniac on a brilliant and challenging course. However, the "finale" obstacles to get up to the slide were brutal. Passing out or hurling were definitely options once I got up there. I needed a few moments. I really did.

But, I finished. And that's the moral of this story. That and maybe the idea that just showing up is half the battle. Sorry it was long, but many of you enjoy the personal ponderings, or have requested more, and from the numbers of hits these random rants get, it's very much true.

In this race called life, we all win some, and lose some. For me, this victory was huge, and it felt good. We need to appreciate these moments more. Even those self-victories that are only understood and gratifying enough for ourselves.