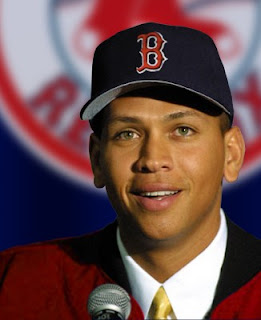 Yup, the most fascinating athlete in my lifetime (in my opinion of course) is giving us more material and more head shaking fodder than we can digest these days. As I've stated before, I've long written and wrapped up A-Rod's career once all of this Biogenesis stuff began (Homeless: A-Rod's Legacy Is defined).

However, it was in a conversation with my brother-in-law and my wife's cousin (Cousin-in-law?) about all things baseball in which a light bulb suddenly went off in my head. In the midst of discussing on base percentages, the relevance and applications of WAR and defensive metrics, the ideal number two hitter, Tony LaRussa's quirky use of the pitcher in the eight spot, and of course, A-Rod, it occurred to me how much his failed trade to the Red Sox changed so many things in the game.

Back in the early parts of 2004, the Red Sox and Rangers had a deal in place to swap Alex Rodriguez and Manny Ramirez, only to see the deal fall apart. Don't remember (or believe me?), then read here.

Of course, the Yankees swooped in on the A-Rod chase in the next few days and Alex Rodriguez became their new third baseman. Something, all Yankees fans, now wish never happened. But hey, at least we got a 2009 Championship out of it. Gotta look on the bright side sometimes.

Nonetheless, what if the trade never fell apart, the union allows A-Rod to restructure his deal, and he becomes a member of the Red Sox? Well, here are some interesting dynamics and thought provoking questions if the course of history was changed:

What kind of numbers would A-Rod put up with Fenway park as his home?

How long would A-Rod have played shortstop for the Red Sox?

Would he have opted out of his deal with the Red Sox in 2007?

If so, where would he have moved onto next?

How would A-Rod have dealt with the Boston media?

How would he have excelled not having to be compared to Derek Jeter everyday?

What if A-Rod is on the team that helped snap the Red Sox World Series drought?

If he is, how much of a hero would A-Rod be in Boston?

How would that have changed his legacy and reputation?

Is he as clutch in the postseason as Ramirez was for Boston?

If not, are the Red Sox still looking for their first World Series Championship since 1918?

Would A-Rod be looked at today as one of the greatest shortstops to have ever played the game?

Would A-Rod and Jason Varitek have gotten along?

Would he have continued PED's under the scrutiny of trying to succeed in Boston?

Is he as insecure in Boston as he claimed to have been in New York?

Would Terry Francona have been able to handle Alex Rodriguez psyche better than Joe Torre?

What would the Red Sox have done with Nomar Garciaparra?

What would they have then done with a young shortstop prospect named Hanley Ramirez?

Would they have dealt him to the White Sox as rumored ?

And who would they have received in return to help them? Paul Konerko?

If so, how impressive would that lineup have been?

How would have Manny Ramirez fared in Texas?

Do we view Manny as "being Manny" if he's doing the same gig in Arlington as opposed to Boston?

What kind of numbers does Ramirez put up in Arlington?

Do the Rangers rebuild as fast with a big contract still on the books?

What kind of career does Alfonso Soriano have with the Yankees?

Would the Yankees have moved a young second basemen prospect, ironically called up later that year, named Robinson Cano, to third base?

Even scarier, do they trade him? And for who?

If the Yankees decide to move Soriano to left field and keep Robinson Cano at second, do they go after Mike Lowell to play third?

Even more of a gut punch to Yankee fans, would they have looked to acquire a young stud named Miguel Cabrera to play third base?

If not, who would the Yankees have spent the extra cash on without having A-Rod's salary on the payroll?

Would Jeter be rivaled for more shortstop accolades by Rodriguez in Boston?

Is A-Rod, well...A-Rod, if he isn't in New York to consistently say "A-Rod-like" things?

I'm sure there are so many more little tidbits that were affected by this trade in which we can go on and on about. However, you can't help but wonder what would've been if A-Rod donned that Boston "B" on his cap in 2004.