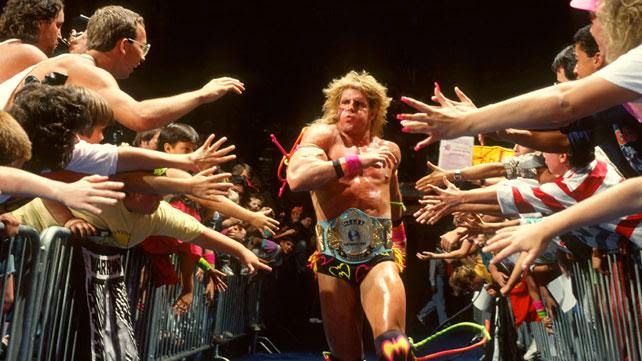 If there was ever a lesson we could learn from the recent death of Jim Hellwig, more famously known to all of us wrestling fans as the Ultimate Warrior, it's that life truly isn't guaranteed and we should live as such.

As the news began to flood Twitter last night, I was shocked to read of Warrior's passing. After all, he just was part of the entire Wrestlemania weekend, and of course, on Raw to cut one of his classic Warrior-like promos where we all had no idea what he was saying, followed by his patented snort, or so we thought at the tme. It really is one of those things in life, "...but, but...we just saw him last night?!"

Again, life is precious.
For me, it just seems rather surreal and tremendously sad to see more and more of the greats who I grew up loving and admiring continue to pass on. It's easy to dive back into searching for the cause of wrestlers dying at such a young age and even pointing fingers and casting reasons for it, but the time for that is later on.

I guess my concern is that part of me wants to protect my childhood, but there is also a part of me who truly want the best for these guys. All of them. You let them into your homes via television, now through other various devices and screens, on a weekly, sometimes daily basis, and they become attached to your being. They become part of who you are. They embody and represent certain time periods in your life. You, me, we, all of us, care for them and become attached to them in a way that can only be understood if you have experienced it.

And when it came to The Ultimate Warrior all of the above-described rings very true. Or should I say, "Thhhhheeeeeeeeee Ulllllllllllllllllltimate Warrrrior!". As I will always remember Vince McMahon shouting his name as such through my television set as Warrior came sprinting down the aisle prepared to hop the apron, run back and forth, pump his fist in the air, and violently shake the ropes to one of the most bad ass and adrenaline-pumping theme songs in wrestling history.

The Ultimate Warrior was larger than life. He felt larger than life. He popped through your television screen. He made little things like having different color straps on the Intercontinental Championship oh so cool. And as I got older, he made the art of the promo hilarious.

Forever, I'll always yell "HOOOOOOOOOOOOOKOGAN!!!" whenever someone has a beef with Hulk Hogan. His promos prior to and circa Wrestlemania VI are timeless. "EXIT STAGE LEFT! EXIT STAGE RIGHT!


Warrior stated the following in his promo just this past Monday on Raw:

"No WWE talent becomes a legend on their own. Every man's heart one day beats its final beat, his lungs breathe their final breath. And if what that man did in his life makes the blood pulse through the body of others, and makes them bleed deeper, than something larger than life, then his essence, his spirit, will be immortalized by the storytellers, by the loyalty, by the memory of those who honor him and make the running the man did live forever."

It seems too perfect. Too eerie, especially now that we know the final outcome. Regardless, the the Ultimate Warrior did all of the above - made our blood pulse and made us feel something larger than life.

That's what makes him a great in the wrestling business. A Hall of Famer. And as touched on by himself, immortalized.

May that same spirit, charsima, passion, and essence carry on with his wife and two daughters.