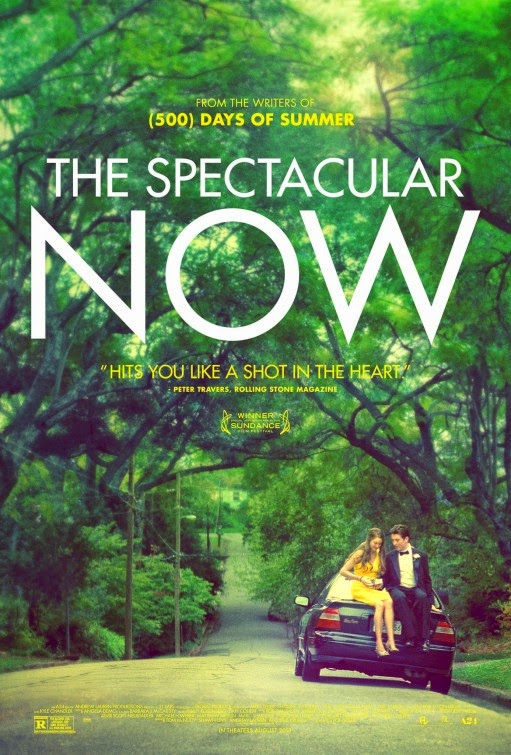 A hard partying high school senior has his philosophy on life change when he meets an unexpected girl who isn't exactly his type.

After learning the truth about his father, Sutter sits in his car staring at the father who he defended and eagerly aniticipated meeting. His father continues to drink with friends, completely forgetting his obligation to Sutter and Aimee.

"The best thing about now, is that there's another one tomorrow."

The Spectacular Now is really a profound film. It's one with the simplest of plots, you know, Person A meeting unexpected Person B, both changing their lives forever. Yet, the art, dialogue, and essence of the Spectacular Now sets it apart. I guess that's the difference in independent and big budget films, indy films have to rely on art and true creativity. Just bloggin'.

Miles Teller was acceptable in his role, but Shailene Wodley as the loving, caring, "Aimee", was authentic and heartfelt. And of course, a huge shout out to the Friday Night Lights alumni (you knew that was coming, right?) in Kyle Chandler, whose performance really moved the film along in his short stint.

Really, this film presents the innocence, fears, and struggles of life as a teenager that hasn't been captured since John Hughes and his epic films. A time period we all can share and relate to, and quite frankly still apply today. The Spectacular Now leaves you with a life lesson about the struggle of living in the moment versus preparing for an unexpected future and how both play out in our lives.

Al in all, a really solid film. Not epic, but simply solid and very much worth the 95 minute run time.