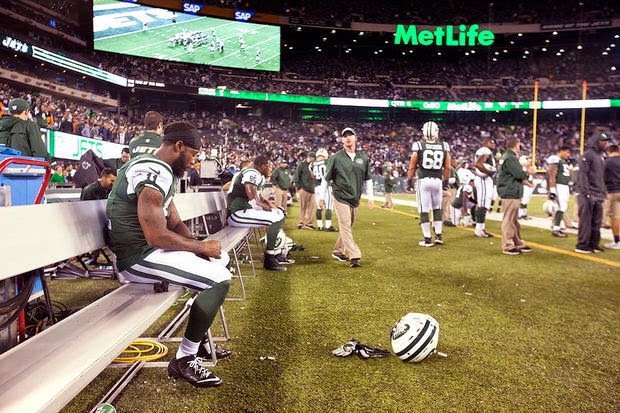 Sometimes you just have to wonder ponder what exactly goes through the minds of some high-ranking sports executives and coaches in professional sports organizations. It's quite easy for all of us on the outside to simply look in and do what we usually do - complain, criticize, ridicule, scout, and agonize - all from the comfort of our couch. Sometimes it's valid, but often we're just fans ranting.

Yet, lately, when it comes to the New York Jets, much of it is true. The decisions and circus-like stories, news, and on-goings that come out of Gang green's camp is utter ridiculous. Even for this fan, faith in this organization is at all-time low.

Let's forget about the near twenty million dollars in open cap space GM John Izdik has not used. Let's not even mention the wasted draft picks over the few years and the small percentage of them that are still on the roster, or don green and white on Sundays. Disregard our lack of skill players, especially at the wide receiver positions. Or the fact the secondary probably couldn't cover me. Well they could, because I'm pretty darn slow, but you get my drift.


Ineptitude and efficiency is everywhere. All over the organization.

All of the above can be expounded upon to really paint a picture of why being a fan of the New York Jets is hard.

Nonetheless, all of those are organization and administrative moves. While it is not an excuse, it can be taken that the best interest was in mind. Sometimes in sports, things just don't work out. And with that comes your typical forty-five year championship drought. No biggie.

But what has truly cost me to lose faith is the recent stories this week coming out of the typical Jets circus that starting quarterback, Geno Smith, missed a team meeting. He wasn't late. He missed it. Altogether. To quote Steve Young's response to the issue, "That just doesn't happen...How does that happen?"

And of course, Geno Smith started anyway. I'm not looking for a death penalty or some type of harsh penalty, but my disputable issue comes down to a culture within the organization that doesn't seem to include much accountability. Later, we also have Michael Vick, who later replaced Smith this past Sunday and looked just as awful, claim "he wasn't as prepared as he should have been."

Ummm, what?! Isn't that the role of a quarterback...especially a backup quarterback, to prepare in case your number is called?

And in regards to Geno, how does that happen? Winning quarterbacks and winning organizations just don't let that happen. Ever!

But, of course, it happens to the Jets. Only the Jets. Same old Jets.

I can take the bad administrative and front office decisions. But when the organization is rampant with negligence in terms of preparation and accountability which then affects the on-the-field product, it's very hard for me to  extend an olive branch. Hard for me to give them the benefit of the doubt. Especially for an organization that hasn't provided much return on the faith it's fans provide.

We've seen these egregious impulse decisions (see: Brett Favre and Tim Tebow) every year. The Jets are on their second - second! - highly drafted quarterback in which they've done nothing to help progress or grow.

I like Rex Ryan, and I liked what he brought to the Jets upon taking over. Sure, the back-to-back AFC title games were nice and helps build some equity, but he also brought a swag that the Jets haven't had in my lifetime. However, over the years we have seen Ryan lead a bunch that is frequently undisciplined on and off the field (seriously, who gets more penalties for twelve men on the field than the Jets?). The offense is also a yearly disaster to watch.

I'm usually all for consistency with my pro teams in terms of coaching and regimes, but it might be time to make a switch at head coach and possibly start placing some fire to the seat of John "waiting on the 2015 season" Izdik. The Jets need to stop attempting to steal the back page here in the big bad city. Or to stop trying to be an attractive, "player-friendly" destination for free agents. The Jets need accountability, order, and most of all, a winning culture.

It's been 45 years of doing things the "Jets way." I think it's safe to say it's not working.

Until then, I'll do what I do every Sunday when watching the New York Jets play - hope for the best, and expect the worst.