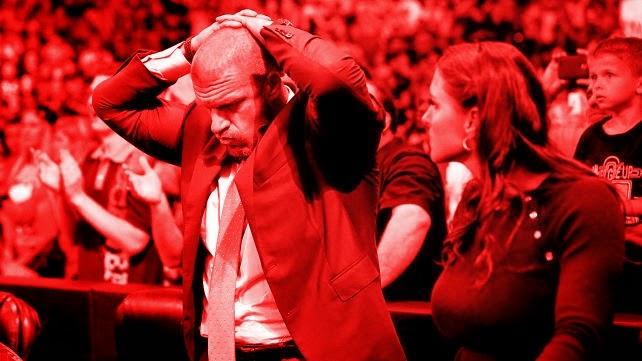 I can't remember the last time I've been this disinterested in pro wrestling, especially the product of WWE. The company that has made "entertainment" the focal point and philosophy of it's wrestling company has been anything but over the past few months. I have gone from being interested in a few talents or story lines, to holding out hope for others, to now just being done altogether. No hope. No interest.

By no means am I looking to pile on like some wrestling fans do with the negativity, the arm chair booking, and the constant hindsight "told you so" critique. I'm just being honest, simple, and well...a fan. The WWE is just not entertaining.

Maybe it was shortly after WCW and ECW died, and WWE began its mega-monopoly on the wrestling industry. The product then just had a coy, yet arrogant feeling of being in cruise control. Almost to the point of not even trying and living off of their Monday Night War's victory.


Today, not much is different from that period well over a decade ago. At least in my opinion. Raw is three hours (which is wayyy too long) of repetitiveness, nothingness, and emptiness. Besides other various underlying issues that contribute to a boring product, the void of relevancy or urgency to watch is my biggest gripe with the product. Nothing happens. Ever. At all.

Well, except for a Paul Heyman promo. And how sad is that?

For a company with so many hours of television and loads and loads of talent, the product is the same deal for every Raw and Smackdown (seriously, who watches that show now?). We get the same matches and rematches, and again, nothing happens.

We get Cena. We get Orton. We get "The Authority". We get one major story line. And then the rest is of random matches with no back story, no foreshadowing, or without any sort of purpose in storytelling. If that wasn't harming enough, the WWE also throws in ridiculous attempts at comedy and constant sales pitches for the WWE Network and the Total Divas show.

Personally, I don't need a certain format, or specific talents to be in certain positions, or even a certain style of television. I am a simple wrestling fan. Just give me wrestling. Give me story lines. Give me intrigue. And Give me a reason to tune in next week!

I want to feel like I can't miss a show.

Unfortunately, heading into the WWE's last pay-per-view, Night of Champions, I barely caught Raw, and if I did, it was with the heavy guide of a fast forward button and my DVR. Regardless, I watched the show and I really didn't feel as if I missed anything. Nor did it make me want to tune in for more on the next night's edition of Monday Night Raw.

I haven't watched a second of Raw in three weeks since. I'm that disinterested. To make things even worse, Raw is literally 15 minutes away this Monday night inside the Barclays Center here in Brooklyn, and I have no interest in attending. None.

I'm at the point where I feel if the WWE wants my time and attention, they need to earn it. And for a fan of the company since I was three (twenty-six years ago), I'm a bit disheartened how they've burned out their equity with me, with this longtime fan.

I feel insulted as of late. I feel cheapened. I feel like all the WWE wants from me right now is my $9.99 a month for a Network filled with content that puts their current product to shame. They're not even trying to truly engage. So you know what? Why should I?