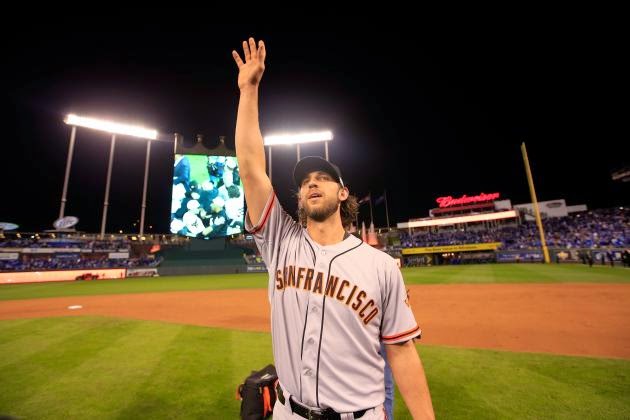 I still can't believe what I just saw and experienced tonight, but I figured it might behoove me to punch the keys following the moment. Maybe I'll be able to put it into words, maybe somewhat explain it, or at the very worst, have some true feelings archived to look back on when this moment resonates.

Tonight's World Series Game 7 was epic. It was amazing. It was the most compelling game of this very World Series. Yet, as we all awaited the moment when Giants manager, Bruce Bochy, would pull the trigger on bringing in Madison Bumgarner like some evil genius who has the "red button", I don't think anyone anticipated the performance he put together tonight. MadBum took the ball, took to the hill, and eventually delivered five innings of shutout baseball. His final stat line looked like this:

Forget that fact that he now owns the record for most innings pitched in the postseason at 52 1/3. Let's not even focus on the microscopic 0.25 ERA he now has next to his name for his efforts in 36 World Series innings. Simply ignore his 4-1 record this postseason, as well as the 1.04 ERA that went along side it. And we won't even mention he also had two victories in this very World Series (Games 1 and 5).


No. While still very (very, very, very, very...and yes, very!) impressive, it's what he did tonight that still has me in awe. Still has me amazed. Still makes me think about exactly what I just experienced to close out the 2014 MLB season.

I witnessed it in 2001 when "The Big Unit", Randy Johnson himself, all six feet eleven inches of his wiry, bird-like frame came out of the bullpen to shut down my boys (the Yankees, if you're new to these parts) in Game 7 of the World Series. That - and still is - was amazing. 1 1/3 inning out of the pen on short rest. But c'mon man! Again, who pitches 5 innings and throws 68 pitches in this role?! And does so with dominant stuff?

Can we rename the World Series MVP the Bumgarner Award. Most Valuable doesn't even represent what he's done this series. #Game7 #WorldSeries
— Dome Pondering (@DomePondering) October 30, 2014

In my twenty-nine years on earth, I have never seen a more impressive performance in sports, on a championship stage, than what Madison Bumgarner pulled off tonight. "Most Valuable" doesn't even describe the sense of worth and imprint he had on this series. And that's no hyperbole.

I can already imagine the call from Mike Breen next June - BAAAANG!! Melo has gone Bumgarner here in the 2015 NBA Finals! Ok, yes, wishful thinking on my part to get a positive plug for my hopeless Knicks. But you get my point on the adjective aspect.

This performance tops my list. What I...no, what we, experienced tonight was once-in-a-lifetime. Guts. Determination. Heart. Pride. Domination. Execution. Drama. Must-See. Poise. Skill. Talent. All of it was amazing. Simply, just amazing to watch.

In an age of pitch counts and lifting pitchers for fear of investment, they are going for it - why you play the game. Love it.
— Dome Pondering (@DomePondering) October 30, 2014

And of course, kudos to Bochy, who in this world of pitch counts, babying of pitchers, and fear of "ruining the investment", went with his gut, gave the kid the ball, and allowed him to play for what is the ultimate prize - a World Series Title.

I don't usually tip my hand on Year End Pondys, but I was all but set to give it to Clayton Kershaw this year, who is very much deserving in his own right. But after tonight, after this month, and piggyback that with his 2014 regular season - how can I not give it to Mad Bum?

The person who pulled off the most impressive championship performance I've ever - EVER! - seen.