Their Problem or Ours? Questioning the Year of Personal Issues Facing Athletes 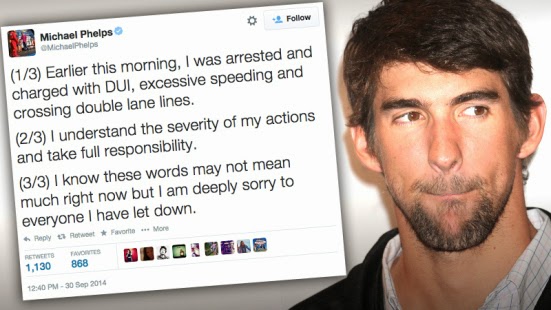 Arrogance. That is all I could muster in thought after reading about Michael Phelps DUI charge. Yes, I know Phelps isn't the first and, unfortunately, won't be the last person to catch such a charge, but that really shouldn't diminish the justification of his punishment, nor the seriousness of the situation.

Drunk driving is dangerous and stupid. I apologize if this sounds like an infomercial or some public service announcement, but DUI charges have become mere footnotes in our news feeds for the cause of exploiting and capitalizing on the stardom of the party involved. Case in point - Michael Phelps.

All too often we see drunk drivers slamming into innocent victims and killing them, leaving the guilty party to survive and be filled with grief for a lifetime. One the other side, we get the heart breaking displeasure of reading about the victim's lives, their families, and once again falling to the reality that life is unjust.


I've always believed things would change if drunk driving carried significant penalties rather than those which govern the states. What if convicted of a DUI you lose your license forever? Or even yet, had to serve mandatory jail time? That would have to change things, no? At least give those a second thought on the risk involved.

As the most decorated Olympian of all-time, and quite possibly someone who may never have financial issues ever again, could Phelps not call a cab? Get a driver? Crash for the night? Or hey, simply just give some ordinary Joe the opportunity to coordinate a ride home for Michael Phelps - the Michael Phelps.

Instead, we get a loaded moron on the roads with a .14 blood alcohol content serving as a loose cannon with the proponent to serve up yet another heartbroken story. Another story that leaves us saying, "this needs to stop".

Is he that arrogant to believe his celebrity is above the law? That his ability to overcome obstacles and adversity in a swimming pool translates to coordination and focus under the influence? Or dare I say, Phelps just didn't care. Can you imagine?

We admire these athletes for all that they do - entertaining us on the field, wearing our colors in international competition, and providing us with a model of athleticism and competitive spirit to emulate and adore. But, is that enough to warrant such immoral, unethical, dangerous, and stupid decisions? Is that enough equity to put up with a lack of accountability from and for individuals who have such influence on our culture?

In a year in which we have seen athletes repeatedly in personal trouble from DUI's to domestic issues, at what point do we truly wonder whether these are issues regarding athletes and their invincibility complex, or rather reflections of our societal standards.