Hopes and Wishes For the Career of Mike Trout 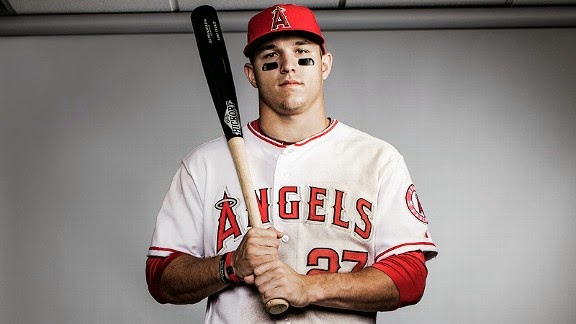 Let's just get this completely out of the way in the first sentence of this post - I'm a huge fan of Mike Trout. The kid is amazing at playing the game of baseball, and it seems every night he is bound to make a play that just leaves you shaking your head in amazement. In my eyes, he is, as of the writing of these words, the best player in baseball. No debate.

With Buster Posey, another one of the game's top talent, already in the running for another World Series championship to add to his resume, there are a many (here, here, here, and here...among others) who are making the claim for Posey to fill the void as "the face of baseball" now that Derek Jeter has left the game (and for some, a hole in our hearts).

Of course, admittedly having the huge baseball crush that is Mike Trout, I highly disagree with the Buster Posey parallels. Winning World Series does help and is a fair case, but the face of baseball? I'll need further convincing. However, it beckons that Trout does have some work to do in the "winning" department before he can overwhelmingly become the guy. Unfortunately, we live in a sports age where these ridiculous measurements and accounting of a successful career is measured by championships.


With the fear of having Trout end up like Alex Rodriguez (sans the personal issues) - a top talent that never felt "top talent" in the sports world - there are a few wishes I have for the game's best player. Not just because I'm a fan, but these are wishes that would elevate Trout in today's sports world to really carry the banner of "the face of MLB".

Right off the bat (no pun intended, well...maybe), this is the number one wish. One of the things Jeter was fortunate to have was an overall healthy career. Besides 2003, when then Blue Jays catcher, Ken Huckaby, drove his shin-guard covered knees into Derek Jeter and separated his should at third base, and yes, the 2013 season where he returned too early from ankle surgery, the captain enjoyed a very fortunate career in terms of health and avoiding injuries.

When you look at how health damaged the career of Ken Griffey, Jr., you realized how much it is needed in order to be that guy. Especially, in a microwave-information society where if you're out of sight, you're out of mind.

You Talkin' About Playoffs?

It was nice having Trout in the playoffs this year, but unfortunately, it was short-lived as they were booted after three games in the ALDS by those oh-so-fun-to-watch Kansas City Royals. Having Trout around for more playoffs will get him into more homes, and onto a stage where fans who don't get to see him everyday can experience it or become enlightened.

Which brings me too...

A walk-off home run. A big-time go-ahead basehit. A diving catch. A base running play. The little things that make baseball so great is magnified in the playoffs, sometimes immortalizing a player.

Edgar Martinez's double down the left field line in the King Dome to score Ken Griffey (who I'm still convinced was flying, like seriously, I don't think Griffey ever touched the ground other than to hit the bases) still resonates when you mention his name.

Johnny Damon's go ahead grandslam of the 2004 ALCS in game 7 (That hurt to type). Or how about his steal of second and abruptly taking third base while the shift was on in the 2009 World Series (this one, not so much)?

I think I made my point. Trout needs a few of these over the next few years.

If he's lucky, Trout needs to somehow get to the World Series. Like the playoffs, it's very much up to who is around him, but playing on the big stage is a big deal. Ask Barry Bonds who had that monkey on his back and eventually got their in 2002.

I wish Mike Trout at least one World Series appearance before his career is over.

Trout can't suffer from Swisher-itis, which his numbers show an early diagnosis of. You know, Nick Swisher who has a career .251 average, and a post season average of .165 with a few meaningless postseason home runs thrown in.

And no, he can't "choke" like A-Rod in big spots. Or even gain the reputation to appear so. My wish for Trout is to be big time. Clutch like David Ortiz, and to be a serious threat for opposing teams in big moments.

It's okay, there is time...hopefully. Fingers crossed.

While we're talking "stages", another wish would be for Mike Trout to help bring home a World Baseball Classic championship. Regardless of your feelings on the tournament (I absolutely love it!), the United States has gone long enough without winning one of these tournaments. We're now at the stage of waiting on when the United States will win one (chalk another one up to our arrogance, huh?).

How great would it be for the legacy of Trout if he backboned a club that brings home a WBC title?

It can only help.

Another wish? For the kid to get some major pub for his supreme talent. One of the benefits for Jeter was in fact that he played here in New York City. He was always accessible and visible in local commercials, on the back pages of widely read newspapers, and easily able to be thrusted into national or global spotlight.

Sure, he's within driving distance of the Los Angeles market (sorry folks, Anaheim is not LA), but Trout will eventually need to get into commercials, maybe a large sportswear endorsement deal (Mike Trout sneakers?!), oh, I don't know, possible Saturday Night Live skits - who knows? Anything that screams mainstream American international society in order to become a household name. You don't even have to watch sports or even have seen them play, but everyone knows Peyton Manning. Everyone knows LeBron James. They transcend while representing and carrying their leagues to greater heights.

There is no doubt Trout is as good in his sport as Manning and James were in theirs at his age, and an argument can be made that he is better.

In order to be the guy, he'll need this element along with his good play. Just another wish.

This all doesn't go anywhere without the support of Major Leauge Baseball. Without beating a worn drum, we all know MLB could do a much better job of putting their great talents over as superstars and representatives of the game to the youth.

My last wish is that MLB and new elect commissioner, Rob Manfred, gets behind the Trout push.

The wait to replace Jeter has lasted long enough, and The Captain isn't throwing on a pair of spikes anymore. It's time for a new talent, and a renewed face to take the game of baseball into the next generation.

I'm not saying Trout is the guy, but he seems like a pretty damn good candidate.

And just to feed my baseball crush...I hope all these wishes come true for him so that he is - the guy.