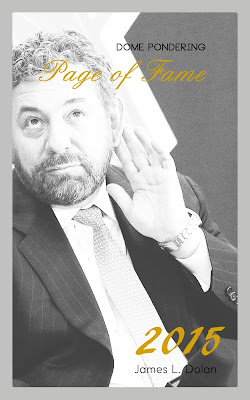 Oh, folks, this is going to be a good one. Long-time DP devotees know about my annoyance and heartache with my beloved New York Knicks. Yup, love hurts, right? Well, much of that hurt began when James L. Dolan took over the operations of Madison Square Garden from his father, including the Knicks, and it's been a struggle ever since.

Ask any true New Yorker or Knicks fan about James Dolan, and you'll be sure to get an interesting reaction. The son of Charles Dolan, who once ran a proud empire with successful teams and little no controversy, handed over10% of thus empire to the younger Dolan as almost a vanity project. Here son, you really haven't done much, here is some responsibility. Go run MSG!


Adding to the Dolan persona is the fact that he has a band and still is active as a guitarist. I'm serious, just Google "JD and the Straight Shots". And of course there are the numerous amount of meddling he does with the Knicks which leads to making bad deals, intervening in basketball decisions, and oh yeah, the unconditional love for Isiah Thomas (whose Presidency with the Knicks was a disaster) to run something - anything! - within his MSG jurisdiction. All which are mind-boggling and annoying.

I'll give him some credit, Dolan does some fantastic charity work with the Garden of Dreams Foundation and other numerous, mostly anonymous, donations.

However, for this New Yorker, the above usually is what wins out and annoys us Knicks fans to no end. A two-time two-time "Idiot of the Year" Pondy Award winner (2007 and 2010), Dolan continues to provide me with fodder to write and vent on here at the DP.

Welcome to the DP Page of Fame, Jimmy D, even if the Knicks win a championship one day, you'll never be forgotten, and will always be interesting.

D is for Dumb. D is For Dolan.

Turning My Back on Brooklyn?