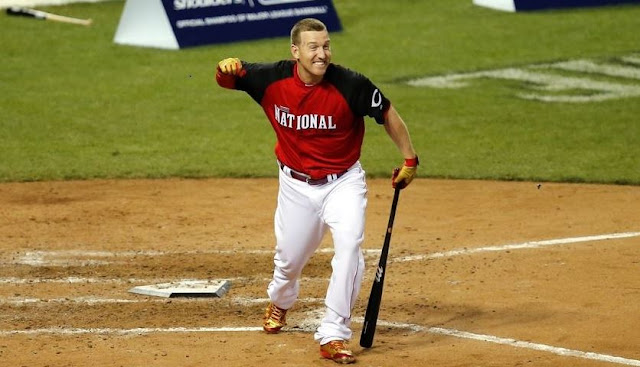 I couldn't wait for it. I'm a huge baseball geek, and for years I've attempted to tell everyone who would listen that the MLB All-Star festivities are by far better than any other league's. Yes, even the NBA's, who indeed does a second-to-none job on marketing, production, hype, and overall connection with a younger fanbase - an area in which MLB and commissioner, Rob Manfred, has made a top priority upon taking office

For me, what separates baseball from the rest, my biases aside of course, is that the actual competition and purity of the weekend. You can't go through the motions in baseball the way you can in the other sports. The way we see in the NBA, NHL, and even the mighty NFL. Especially, the NBA where great production can become overproduction with less substance that the hype may lead you to believe.

Even with the All-Star Game yet to be played, the MLB All-Star festivities has been awesome.


Starting with the Futures Game, which has the best gimmick that can't be duplicated in any other sport, perhaps other than soccer. In an age where the identities and draft picks of teams are now more transparent and knowledgeable to fans, this game has taken on a whole new meaning from anonymous players we watch with intrigue, to anticipation of seeing "our guys" and other prospects play one another. My only gripe is that the game is still held on a Sunday afternoon at the same time as MLB wraps up it's first half with regular season games. Put the game on Sunday night!

And then there is the Home Run Derby. Ah yes, I love this event. Sure it's waned over the years with guys taking pitches, the action stalling out, and it feeling like it would never end - typical baseball, right? But  with this new format and new rules? A whole new derby was christened last night. Absolutely genius. I loved it. I love it. And I hope it stays this way forever.

The match ups, the tournament bracket style, the intrigue - everything! It keeps interest as I too want to see big time match ups like Anthony Rizzo vs. Josh Donaldson and Prince Fielder vs. Todd Frazier. And well, I just want to watch Joc Pederson swing all day, because the dude makes hitting a baseball so far look so damn easy.

Also, the time element adds something new that baseball just doesn't have anywhere in it's game.

Sure, I can go without Chris Berman on the call, and it even seems they realized that from last year's Twitter trending of Berman - mostly with negative feedback - by mixing up the call with Karl Ravech and others, but otherwise, the Home Run Derby was awesome. And the almighty king that is TV ratings absolutely proved it.

Dare I say, I'm looking forward to next year's event. I'm completely on board as of late with what Commissioner Manfred has been doing. I tip my hat to you, sir! Keep the modern changes coming. Keep em' coming.