Hoping for More than Just the World Cup 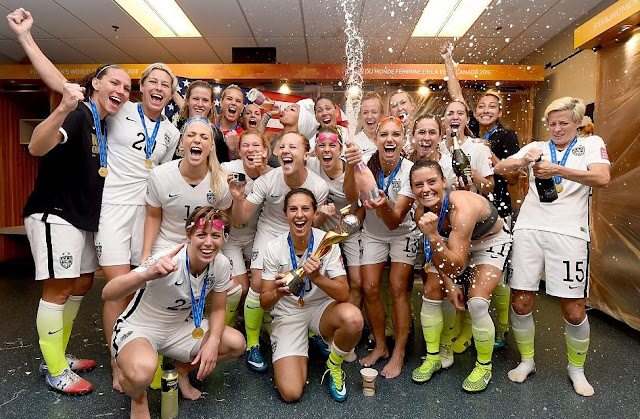 It was the perfect end to a patriotic July 4th weekend in watching the US National Women's Soccer team bring home their third World Cup in history. For one Sunday afternoon, it was nice to see our nation care about the world's game and embrace it as their own. The twenty-three women who finally achieved this goal deserved it as they looked to amend the hurt and disappointment from the 2011 loss to Japan in the Finals, and the 2007 loss to Brazil, where Marta and her one-named celebrity status reigned supreme. And let's be honest, how awesome is Marta, though?


Regardless, this win feels huge. It's big. In so many ways that really you don't need me to tell you about. It's big for the game. It's big for women's athletics. It's huge for young girls across the globe and especially here in our nation who play the game. Mostly, it's a ginormous weight lifted off the shoulders of what really is a tremendous team, and what has been for years now, almost nearing a decade without a Cup to show for it with this talent. Being that good, there were always the weight of the 1999 team and the ridiculous comparisons that came with it, though the teams couldn't be anymore different in style. There was the pressure of having to capitalize on that talent before the winning window closed.

And they did it. They so did.

For that reason, I am essentially thrilled for all of those women and the coaching staff of this squad. Especially, Coach Jill Ellis, who made one of the most difficult decisions in sports in having to bench an aging veteran when she did so with Abby Wambach and Christie Rampone.

And how can we forget the memories in this tournament? The opening game. The Germany game (How did Sasic miss that PK?!). And of course, the epic thrill ride within the first fifteen minutes of the Final that brought on flashbacks of Brazil vs. Germany from the Men's World Cup just last year.

How about that midfield kick by Carli Lloyd?! That was utterly ridiculous! Like, the type of amazing when you realize you can't even do that in the FIFA 15 without some crazy glitch happening. Oh yeah, there was Carli Lloyd. Have a day, Carli Lloyd!

And of course, on a personal level, there was the growth of my insane soccer crush on Sydney Leroux. Yeah, my wife knows...

With all that said, my hope is that this isn't just a flash in the pan sort of euphoria, which to be honest, I'm expecting. You know, when we as Americans get so wrapped up in patriotism and the madness of it all, and then forget the sport the minute and moment the next what-have-you-done-for-me-lately event hits our social and cultural stage.

There was that hope in 1999 along with Brandi Chastain's sports bra (which is such an epic celebration moment.), and it didn't last. And once again in 2003. That too, did not last. Both Cups hosted on American soil.

I selfishly want more for this 2015 squad than just a pretty cool "30 for 30" documentary someday. More than footage of Carli Lloyd's spectacular goal. More than just a ratings footnote as the most watched soccer game in American TV history. I want this 2015 team to be the one to finally inspire women's athletics in our country, and to move forward the beautiful game of soccer.

Is it really too much to ask for? And if it is, what will it take?