Taking it Down is a Small Step: Reactions to Removal of SC Confederate Flag 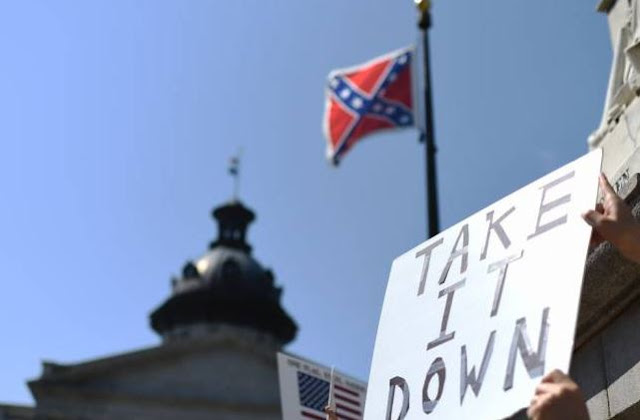 There are all sorts of emotions and reactions I have towards the permanent lowering and removal of the Confederate flag at the South Carolina Capital building. Obviously, I believe it's a good thing as the flag does represent a time and mindset in which this country still struggles to digest, and is years away from overcoming.

And yes, it's a step in the right direction for social awareness in our country, especially during times where racial issues have become the forefront of our culture.

However, and yes, here comes the huge side bar, I simply question HOW big of a victory this truly is for racial tensions and social awareness? Without attempting to be cynical, there is a part of me that mourns from utter disgust that nine men and women were murdered via a horrific hate crime for a movement to take place. For even such a question of, "why do we still fly such a flag that represents such terrible history within our state?", this massacre had to precede it.

And further more, there was the sadness of some who looked to defend the flag, even raising up claims of pride for the Southern heritage and the Confederacy as reasons for the flag to be flown.

Even scarier is the CNN poll which states that many consider the flag to be a symbol of Southern Pride.

I am all for history and not running from our terrible past, but in my opinion, as a minority in this country, how does anyone justify flying a flag that represented a regime that fought for the institution of slavery? How does a state offer and commemorate generals and other leaders who fought for such a thing? I just don't get it.

Seriously. I don't. I still have a tough time wrapping my mind around it. Are there people who really believe in the values the Confederacy once fought for? What?!

I understand southern pride, as I too have strong honor in my roots as a New Yorker, but the Stars and Bars carry nothing but negative connotations of slavery and denial of civil rights.

But again, this issue is more deeply rooted than Southern Pride and the representation, emphasis, and interpretation of flags. This situation continues to prove how far off we are as a nation in understanding one another, and coming to grips with the ugliest portion of our nation's history.

Again, politically, I'm on board with the removal of the flag from the Statehouse. Yes, take it down. If you want to fly it proudly on your home, on your car, or wherever, it's a free country, you can do so. You have the right to do so. That's the beauty of this nation. But not on government land. Not on structures that should represent ALL South Carolinians - not just the pro-Confederate supporters.

Regardless, this is a small step towards a big issue. Americans - all colors, all races, all nationalities - shouldn't have to live in a state that flies such a symbol of institutionalized hatred.

And more so, it's all a sad social awakening reaped from a senseless massacre caused by the type of hate such a flag embodied.