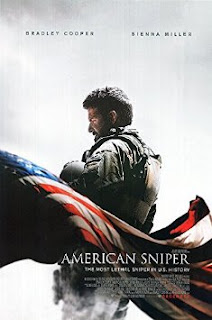 The life of Chris Kyle as be looks to balance his four tours in the Iraqi War and his family life back at home in the United States.

After taking out a man looking to launch a missile to do harm, Kyle watches a young boy runs over to the fallen weapon and heaves it unto his shoulder. Kyle struggles with the idea that he may have to shoot this boy as well, begging and pleading to himself for the boy to drop the weapon.

"The thing that, uh... haunts me are all the guys that I couldn't save."

"I'm willing to meet my creator and answer for every shot that I took..."

Going into American Solider, all I had to go one was the impressive reputation it developed and of course the controversy surrounding how it depicted Iraqi's and possibly being in the realm of "American propaganda" I had no idea of Chris Kyle and his story.

After the film, I'm glad I watched it for myself as the film educated me on the man that was Chris Kyle, his contributions to this nation, and of course, the fact that the film is indeed a great one.

American Sniper is a great story that offers a window into the mind and soul of a man who is battled with something greater than just defending our country - defending the soldiers who defend this country. It's a good film that educates and reminds us of the sacrifices that individuals make, and more importantly, that families make for freedoms we often take for granted.

As for the compliments to Bradley Cooper, he deserves every bit of it. At some point throughout the movie, you lose yourself in the character, and that in itself says it all about Cooper's performance.

Yup, it's exactly as advertised. Great film. Watch if you have the chance.