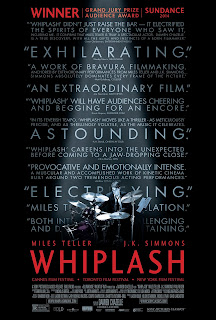 A gifted drummer enrolls in one of the most prestigious music conservatories in the world where his desire to be great is met and mentored by an instructor who stops at nothing to bring out his potential.

After Fletcher brings a third drummer into the folder for an upcoming part, he has the three drummers battle well into the middle of the night to decide who will win it. In reality, Fletcher was simply using the other two drummers to push Andrew.

"There are no two words in the English language more harmful than "good job".

"So, imagine if Jones had just said, "Well, that's okay, Charlie. That was all right. Good job." So Charlie thinks to himself, "Well, sh*t, I did do a pretty good job." End of story. No Bird. That to me is an absolute tragedy. But that's just what the world wants now. And they wonder why jazz is dying."

I absolutely love Whiplash. Upon one viewing, it skyrocketed to my list of favorite movies. I know that's high praise immediately in the review, but this film was absolutely terrific.

First, let's talk J.K. Simmons who is by far the most important reason to watch Whiplash. An excellent, excellent job in his role as intimidating instructor, Terrence Fletcher. Quite frankly, it's up there with one of the greatest performances I've ever seen. No, hyperbole. Really - ever - seen.

My greatest draw to the film is in fact the character of Terrence Fletcher and his psychological edge. Especially, when the only smile he breaks while conducting was in Andrew's last performance. It really makes you wonder, was Fletcher really a cruel person? Or a mad genius?

Then of course comes the cinematography and camera angles that lend to the personality of the film, making it personal, and grips you towards the struggle of both men and they look to find something deep within that has zero measure - Andrew's unique drive and passion.

All in all, my words can't do this justice. Absolutely a favorite of mine.