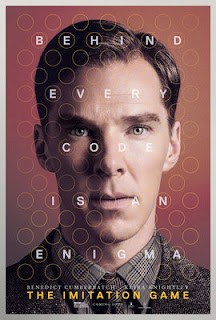 The story of Alan Turing, and his quest during WWII to crack the enigma code along with help from fellow mathematicians in order to end the war.

After cracking the code and realizing that the next attack was on a naval ship carrying the brother of Peter, Turing decides they cannot give away the fact that they have broken the code or else their work would have been for naught. The realization sets in of the lives that are on the line, and the tough decisions they had to make.

"Sometimes it's the very people who no one imagines anything of who do the things no one can imagine."

Oddly enough, I never heard of The Imitation Game until my wife brought it up as an option for a movie night. Obviously, I did what most do, pull it up on IMDB, look at the rating, the description, and make an assessment on whether it's worthy of investing time in. All of the above passed the test.

Of course, I'm now glad I gave the green light as this film is very, very, very good. Benedict Cumberbatch (how great is that name?) is phenomenal and Keira Knightley is as solid as she always is. The main draw to this film is the overall story, which is tremendous. Especially, when it is one that went untold for so many years and changed the world for the better in so many ways.

To sum it all up, if you, like me, hadn't heard of Imitation Game, you can use this review as more push to do so. Again, a really, really good film.