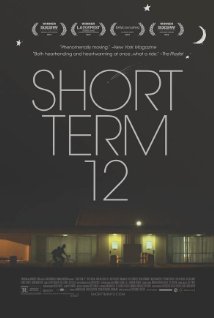 A young member of a residential treatment facility juggles the issues and concerns of that world alongside the personal occurrences and struggles of her own.

After the issue facing Jayden forces her to deal with her own problems, Grace takes off for Jayden Dad's house in hopes of saving her, all while restraining from taking out her own issues in the situation.

In selecting this film, I did what I'm sure many people have done on a weeknight, flipped through some films on Netflix and came across this hidden gem of a film. Of course, I cross referenced it with IMDB, Rotten Tomatoes, etc...and decided to give it a go. Boy, am I glad I did! I'm not sure what it is with me and indie films, possibly the raw emotion and simplicity, or just the development of the characters, but Short Term 12 was really, really, good.

What hooked me is exactly what I said above, the depth of the characters and the life issue it brings to a front when it comes to "underprivileged" kids (love how the movie attacks this term), foster children, and many other issues we vilify children with. In Short Term 12, there really aren't any heroes or any coming of age stories, just a lot people dealing with real life issues, and how they are all connected to a deeper meaning of the baggage we carry.

Brie Larson was absolutely fantastic in her role as Grace, and it's a character you find yourself rooting for because of her connection with the kids, as well as the inner struggles she carries from her relationship with her dad.

Short Term 12 is a fantastic film that is absolutely worth the watch, especially considering the 90 minute running time.