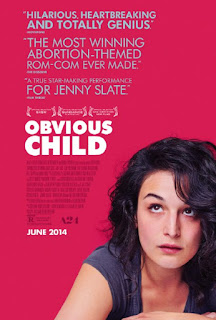 A stand-up comedienne deals with life after losing her boyfriend, her job, and then becoming pregnant during a period where she feels alone and afraid.

After blowing Max off for a potential night of hanging with a friend who had an in to Los Angeles, Donna realizes that wasn't the road or security she needed at the time and decides to bolt the situation.

"I remember seeing a condom; I just don't know exactly what it did."

Obvious Child is a quirky little film that can be dissected into many ways, some good, some bad, some just not very good. Overall, the film was entertaining and was a pretty fair watch.

For me, I went into this without much info and quickly realized after a bit of brain wracking and a pop clue from the wife that Jean Ralphio's little sister from Parks and Recreation was the lead - Donna Stern for those with more movie IQ than me. And of course, Slate was really great in this role, possibly a breakout one for her, as it was funny, quirky, unique, and she really carried the film. In many ways, without Slate, this might have been a complete dud.

Comedy is the key to Obvious Child, as Slate's character, Donna Stern, deals with life, but uses jokes and awkward dialogue to shed some light on it. However, as stated, there are many bad things  as well. I for one at times found some moments of the 89 minute film to drag, and I felt the plot could have been a bit deeper and connecting. But that's just me.

Nonetheless, Obvious Child is an interesting watch - a short watch - and can be entertaining if you let it be.