Believers Are Out of Line When it Comes to Kim Davis 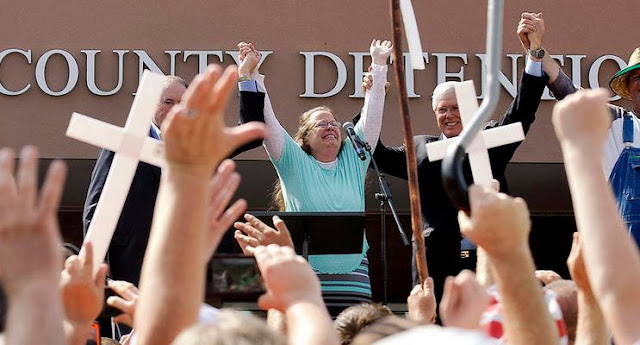 As a believer, as a man who holds faith in the context of the Bible, and as one that associates himself with the description, "Christian" (albeit the beating and distortion the term has become today), I am overly appalled at not just the actions by Kim Davis, but by many who are in of her support.

The entire #StandwithKim and #PrayforKim movements (then again, are trending hashtags really "movements"?) are rather ridiculous. The idea that Davis, a government official, who serves the public, works for the public, and is paid by the public - you know like public, meaning EVERYONE, not just believers - would take it upon herself to refuse gay couples a marriage license is ridiculous.
Davis isn't even a judge, or someone in position to legally make such a decision! And of course, I find it incredibly hypocritical who has been divorced three times (with two kids out of wedlock) to claim to be defending the sanctity of marriage by not issuing it to same-sex couples. Throw stones much, Kim?!

Now if she processed it, and kindly wanted her name to not be placed on the certificate, maybe I'll buy her inner conscience on that one.

Regardless it's people like presidential hopeful, Mike Huckabee among many, whether it be for publicity or true endorsement, who called for all to support Davis and has stated that "God intervened" to get Davis released from jail. Let's be honest, the jailing of Davis has nothing to do with the issue of religious freedom in our nation, nor is it another example of Christian persecution as Huckabee and others are alluding to or as simply outright claimed.

Davis is not being persecuted. Davis is not some type of hero to those who believe, or even to those who have an overarching agenda against the gay community, as if they are the sole reason for a decline of faith in our creator within our society.

Quite frankly, fellow Christians who believe in this are the issue at hand here. All of those (or us) that buy into this public relations hype and the false pretense that Kim Davis was standing up for God and the Bible, are in fact the problem. Again, all Davis did here was break the law.

She was not persecuted. That rhetoric and reasoning is such garbage. We enjoy so many liberties when it comes to practicing our faiths and beliefs here in America. Just ask those overseas in religiously conflicted regions what real persecution is. Or those currently fleeing Syria. Or how about asking those wrongfully incarcerated here in the States solely on the color of their skin? Even possibly beaten or have had their life snuffed out while in custody for that same reason?

Davis was picked up, booked, jailed, and released. And now she is (somehow) being celebrated for breaking the law, or you know, denying those gays the opportunity, the one in which the laws of the land allows. Those are the facts. Oh the horror! Such persecution! #PrayforKim! Sorry Mr. Huckabee, take a seat on this one. I will not waste my prayers or the Lord's time on this. Sorry.

Until the Christian community focuses it's energy towards the issues of helping people and the real issues facing men and women (sin, for all the churchy people), because there are so many out there who are hurting - like really hurting, then we'll continue to deal with these ridiculous stories. Pointless ones that don't win over souls. That continue to push people away from God. And those that continue a growing combative relationship with so many others sectors within our society.