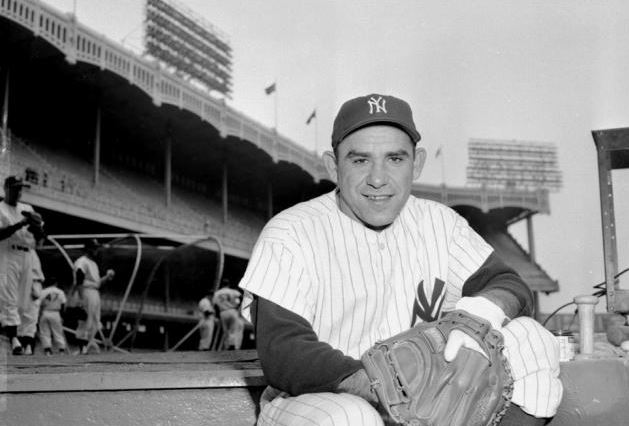 Unfortunately, I learned of Yogi Berra's death via Twitter at 3:30am. While up going through schedules, paperwork, and e-mails for work, I decided to take a ten minute break and saw an image of Yogi Berra on the social media platform with the heart dropping text "1925-2015".

For me, a thirty-year old Yankees fan, I'll be a fool to say I understand Yogi Berra's impact on baseball and pop culture. Quite frankly, I don't and never will. Berra transcended the game of baseball with his personality and his intelligent quotes, now known as "Yogiisms". I am a product of his influence, and never truly was able to capture the ball player, as well as Berra during his peak years.

Regardless, Berra is easily one of the best baseball players ever. Seriously, ever. I am a firm believer that the position of catcher is more important and tougher than quarterback. Just me. Just bloggin'. And I am well aware that statement may just be sacrilegious to many.


I am still in awe at some of the numbers, achievements, and statistics mentioned about and associated with Berra. 10 time world champion. 16 times in the World Series. 3 Time MVP (as a catcher!). Just unreal. Absolutely, unreal.

However, the greatest thing I've taken away today from the passing of Yogi Berra is the mere fact that many who knew him continue to talk about him as a person, rather than those very impressive baseball feats and achievements. That's such a testament to Yogi Berra, his wife, and his family. Yogi's legacy ultimately is indeed his life, not just a part, or segment, or attributed to a special talent he possessed.

Everyone is just discussing Yogi, the person. On this day, as we all are remembering and learning more about Yogi Berra, this is what stands out to me. A man beloved for being himself. Remembered for the quality of life he had, and the way that life impacted so many others.

I want that for myself one day. I really do.

Thanks for the memories, Yogi. For all you did in baseball, and all that you've done for others through simply being a great person. For just being you.