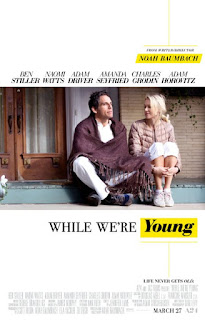 A middle-aged couple life's and perspective is changed when a younger couple enters their lives.

The last scene when a toddler is playing with a cell phone takes a selfie, then dials and calls  friend. Both Josh and Cornelia stare at them in amazement and fright.

"For the first time in my life I've stopped thinking of myself as a child imitating an adult."

While We're Young takes on a very interesting dynamic of dealing with age, while still not succumbing to the "old person" stereotypes. The film does a great job of this from the perspective of Josh and Cornelia, and how alive they feel when they tackle many of the things their new younger friends engage in. It's also very realistic when they realize that many of the things are just the process of life and growing up.

It's easy for many to identify with Josh and Cornelia as characters who become comfortable in their lives, and their search for more passion increases. However, towards the end of the film, the plot takes of a weird progression that focuses on the characters rediscovery of themselves being wrong. It's an interesting dynamic, but it falls flat in my opinion.

Ultimately, it doesn't hurt the movie that much as it's still a decent movie, but it's still a good watch. Especially for Adam Driver and Naomi Watts who were good in their roles.