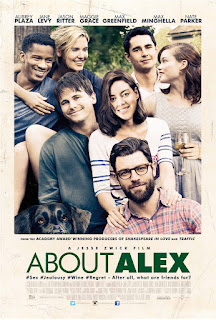 A group of college friends reunite for a weekend when one of them attempts to commit suicide. What ends up happening are old truths, revealed emotional baggage, and breakthroughs that needed to happen for each to continue on in life.

After longing for Isaac the past few years, Sarah was able to resist the temptation of what her twenty year old self wanted, and realize what was best for her moving forward as an individual.

"Let me tell you something about Bruce Springsteen, okay? Never trust anyone who is that passionate about the state of New Jersey."

I really enjoyed About Alex. Despite reminding me of a variation of the book, "This is Where I Leave You" by Jonathan Tropper (also later made into a movie), anyone with close school friends can relate to this.

The film does a great job of raising the issue of true friendship in the age of social media, and whether the connection is strong enough and real enough, or if it simply stagnates us into holding onto relationships or different versions of ourselves.

The cast is actually a good one lead by Nate Parker, who really shocked me in his performance. Very solid. Diddo for Maggie Grace who earned many eye rolls in her performances in the Taken series from me, but that was mostly from the writing in those films. Also, it was very, very cool to see Aubrey Plaza and Max Greenfield play off of one another, who definitely met the anticipation.

All in all, this film is an interesting one and a good watch for its 94 minute runtime.